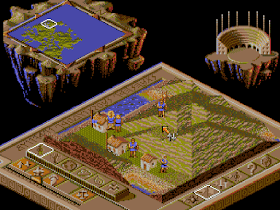 Genre: Strategy
Perspective: Diagonal-down
Visual: Isometric
Pacing: Real-time
Gameplay: Real-time strategy
Interface: Point and select
Setting: Classical antiquity, Fantasy
Published by: Virgin Games
Developed by: Bullfrog Productions
Released: 1992
Platform: SEGA Genesis / Mega Drive
In their game, Bullfrog (authors of the original, PC version) and Virgin (publisher of 16-bit compilations) implemented an interesting but rare concept of "half interference". That is, the little men subordinate to you
can develop without your intervention, but with your help they will do it much more successfully.
The plot of "Two Tribe's" is as follows: you are a modest deity of a village forgotten by everyone, and in order to prove your professional suitability and place in the pantheon of the Olympic gods, you need to bring your blockhead followers to prosperity and prosperity, taking away the territory from all enemies (from small titans to Zeus himself ). But if in the first part of "Populous" you were a nameless deity and even without your own face (this is already some kind of bum), then in "TT" your followers should know their idols by sight. To do this, select from the start menu
option "Create Your Deity" and play with the identikit right up to Ragnarok. When a worthy face and name for the future supreme god are chosen, feel free to choose the "Conquest Game" option and get ready to receive the winner's laurel wreath on your head. And although this will happen in two weeks. training won't hurt.
The main thing in mastering "Populous-II" is not to catch a heart attack when you first get acquainted with the number of control icons. For convenience, we divide the screen into five parts. In the center is actually the main view of the trust territory, and on the sides are located (clockwise, from two o'clock): an information panel (in the form of the Coliseum), it shows the number of population, yours - in blue, the enemy - in red; control line; ruler of Divine power; and finally a non-scalable map of the entire world.
There are six icons on the control bar. From bottom to top: go to the Papal Magnet, the thing like a sun on a long pole with tentacles that all your people will be aiming for if you click on this icon. Previously, however, this Papal must be installed ...
Next icon: checkbox; if you turn it on, then the people, after gaining sufficient strength, will not go to smash the adversary, but will begin to build houses. A universal team - if there is not enough space for housing, your people will be offended and will go to take away houses from the enemy...
If you click on the image of swords, then your people will stop building houses and go to hunt down the enemy and beat him with a stick from around the corner. Not very useful - if your entire army is killed, then a significant part of your territory will immediately remain without protection.
Next is the icon for the formation of "flying" units. When it is turned on, the people will gather in large gangs. It is easier for such gangs to survive when attacked by the enemy, but the time for collecting them is too long. And again, their loss is too sensitive for your people. The icon with a question mark will show you the data for any person on the map. Absolutely useless.
Well, the last icon is the options screen. There you can restart the script, put full screen or exit the game.
With a ruler of magic it is more difficult. It is divided into types of sorcery and individual spells. There are only six types: Earth, Water, Air, Man, Steam, Planet. At first there will be only a couple of spells (depending on the type of magic that you chose when creating your god), but by the last fight you will have a whole pack of spells at your disposal for every taste.
Well, the summary: I recommend. Honestly. If the passage of even one mission takes about half an hour, then in order to master all 999 cards (yes, exactly nine hundred and ninety-nine!), You need to go to the monastery and sit down at the Megadrive for at least a year for a year ... But If you like complex strategy games and are not afraid of mediocre graphics, then "Populous-II: Two Tribes" is for you!