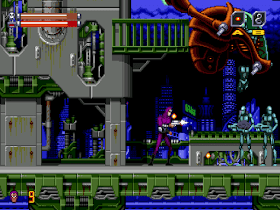 Genre: Action
Perspective: Side view
Visual: 2D scrolling
Gameplay: Metroidvania, Platform
Setting: Sci-fi / futuristic
Published by: Viacom New Media
Developed by: Viacom New Media
Released: 1995
Platforms: SEGA Genesis / Mega Drive, Super Nintendo (SNES)
Colorful platformer with shooting. The game takes place in 2040 and is partly based on the Phantom 2040 animated series. In the game you have to destroy various cyborgs, etc. And you can also use rope and Velcro to get into hard-to-reach places. As the game progresses, collect various bonuses. NTSC and PAL versions differ from each other in the presentation of the plot, which in the game is not anyhow. To fully understand, you had to watch the cartoon. It touches upon the problem of mankind - environmental pollution, class inequality, unemployment, poverty and an ever-growing population. In the future, human-like cyborg machines “biots” were created, somewhat similar to the T800 Terminator. A great danger looming over the city of Mertropia comes from the Madison Corporation. The game is divided into seven separate chapters, three of which are divided, and you can choose the path in them. Such a twist on the plot.
‹
›
Home
View web version