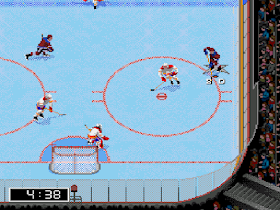 Genre: Sports
Perspective: Diagonal-down, Top-down
Visual: 2D scrolling
Interface: Direct control
Sport: Hockey
Published by: Electronic Arts
Developed by: High Score Productions
Released: 1996
Platform: SEGA Genesis / Mega Drive
Continuation of the popular hockey series from EA. The game has only gotten better over time. But it also had its own uniqueness. Forcing to play games of different years. The game has a huge number of different settings, both the game itself and the commands. Beginners will love the tutorial mode, which not only explains which buttons to press, but also hones the controls.
‹
›
Home
View web version