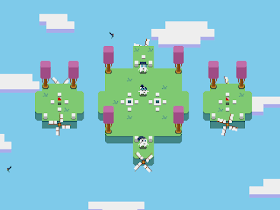 Genre: Action, Puzzle
Perspective: Diagonal-down
Visual: Fixed / flip-screen
Interface: Direct control
Setting: Fantasy
Published by: RetroSouls
Developed by: RetroSouls
Released: 2019
Platform: SEGA Genesis / Mega Drive
The story is about a strange creature named Hatter, who got into a time loop from which he can't get out. However, it's worth a try - for this, at each level you need to collect red squares, so that at the end a key appears that will allow you to go further. The task is complicated by the fact that enemies are running around the screen, plus you can’t get to some places on your own - there is no road. In this case, you need to use the recording and playback function: first, record your route on a flat surface, and then play it back, for example, flying over an abyss.
‹
›
Home
View web version