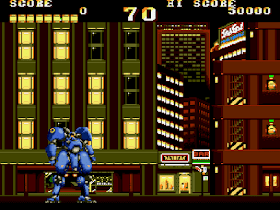 Genre: Action
Perspective: Side view
Gameplay: Beat 'em up / brawler, Fighting
Vehicular: Mecha / giant robot
Setting: Sci-fi / futuristic
Published by: Columbus Circle
Developed by: Fill in Cafe Co.
Released: 2020
Platforms: SEGA Genesis / Mega Drive, PlayStation (PSX, PS1)
The year is 2142, a global and destructive war has taken place in the world - you might think that wars are different! - and now the order is trying to protect the police in combat robots called "Slave Gear". Such a world is represented by the game Mad Stalker: Full Metal Forth.
In the role of a police officer with the call sign Hound Dog, players will have to go through several two-dimensional levels and smash the local bandits to smithereens, led by the Rising Dog, the same combat "Slave Gear". The gameplay is based on traditional beatmap mechanics - moving forward, the hero fights in hand-to-hand combat against numerous opponents that appear on the screen every now and then. The main weapon of the protagonist is a sword. The combat system is as simple as possible and not very dynamic.
‹
›
Home
View web version