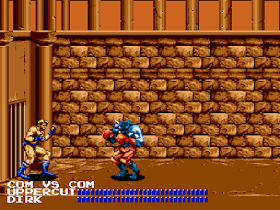 Genre: Action
Perspective: Side view
Visual: 2D scrolling
Gameplay: Fighting
Published by: American Treco Corporation
Developed by: Aicom Corporation, ALU Limited Company
Released: 1992
Platform: SEGA Genesis / Mega Drive
12 heroes, representatives of 12 different star systems, must identify the strongest fighter. It is clear that this will not be easy, even at an easy level (and there are 3 difficulty levels in total). The fighters themselves are diverse and even specific, but in general the game does not exceed the average in terms of graphics, music and action. For the overall victory, it is enough to defeat the opponent once. Game for 1-2 players.
‹
›
Home
View web version