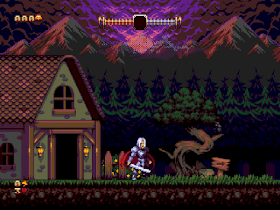 Genre: Action
Perspective: Side view
Visual: 2D scrolling
Gameplay: Metroidvania, Platform, Puzzle elements
Interface: Direct control
Setting: Fantasy
Published by: Neofid Studios
Developed by: Neofid Studios
Released: 2021
Platform: SEGA Genesis / Mega Drive
Demons of Asteborg is a dark fantasy story that puts you in the role of a knight of the royal guard named Gareth. He confronts the demon Zadimus, who wanted to destroy his hometown of Asteborg. The plot of the plot is more than banal, but on the other hand, it emphasizes the implemented ideas as much as possible and contributes to a smooth immersion in the harsh lore of the game.
The first thing that impressed me was the simplest and most understandable “three-button” control. You take your gamepad, we walk on the “arrows”, and on the three buttons we wave our sword, jump and perform a magic attack. Everything. The impact from attacks, from the physics of the movements of the main character, from hitboxes is smooth, pleasant, obedient and predictable. From what you get real pleasure from passing.
Next, the visual component. Against the background of a restrained and dull color palette, the player is presented with high-quality pixel art with smooth and detailed animations. Beautiful special effects that do not overload the picture look organic and holistic. It is worth noting that the game was created in a resolution with an aspect ratio of 4:3 (like classic TVs and monitors).
The graphics in Demons of Asteborg squeeze the full potential out of the 16-bit SEGA Genesis \ Mega Drive console!
When you immerse yourself in the gameplay, you will certainly feel the musical accompaniment of the game. It's real, with its instruments and melodies, it took me to the 90s, at the time of coloring contour maps and chewing gum "Boomer". I have no complaints about the soundtrack and soundtrack. Atmospheric melodies create a constant intrigue from a fantasy adventure.
The gameplay itself is adapted for “3 buttons”. We run left and right, jump on the platforms, cut down all sorts of monsters (there are a lot of them, all different, each has its own attack pattern and movement speed), collect bonuses and coins, try not to get damaged and not fall into the abyss or on all sorts of dangerous spikes. Bosses are waiting for us at the end of each level. The world is represented by quite a variety of locations - forests, castles, dungeons, settlements, swamps, mountains.
The gold collected at the levels can be spent at the end of the level at the local merchant, pumping your skills or stocking up on heals to the next level. At each level, you will unlock useful spells for your hero, they will help you solve simple puzzles and boss battles. And, of course, you will also find pleasant hidden secrets.
The passage on the Normal difficulty level is quite balanced and the challenge develops as you progress. The authors were inspired by such projects as Ghouls'n Ghosts, Castlevania, Mickey Mania, Space Harrier and Panzer Dragoon. Moreover, the influence of each of the games listed can be found in all aspects of the game, this is a fact.
‹
›
Home
View web version