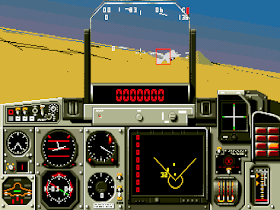 Genre: Simulation
Perspective: 1st-person, Behind view
Vehicular: Flight / aviation, Vehicular combat
Published by: Domark Software
Developed by: PanelComp
Released: 1993
Platform: SEGA Genesis / Mega Drive
In this game, the developers have squeezed everything they can out of the console. The game literally creates a feeling of flight speed - there are both air and ground objects on the screen, which are displayed very clearly. Control is done through the menu system. You get access to weapons, landing gear and aircraft brakes, go into map mode and use a ton of other commands for various flight situations. The game is based on a plot typical of the early 90s: the mythical Arab state of Satar was attacked by the non-existent country of Arzaria. Western countries are concerned, since Arzaria's dictator General Hasouz now controls more than a quarter of oil reserves. In addition, the captured Satar is a springboard for an attack on another country. In this regard, Russian pilots, together with NATO units, are fighting for the liberation of Satar. This is how the appearance of the Russian fighter is explained. You have to complete 1 training mission and 5 combat missions, all with limited fuel (which runs out very quickly). MIG can land for refueling or even refuel in the air (in the 3rd mission). You will attack land targets, fight ships at sea and of course there will be dogfights. The capabilities of the MIG-29 are the widest. This is the ability to change the camera (via the menu), the choice of weapons (aircraft gun, 5 different types of missiles), manual or automatic landing, ejection, etc.