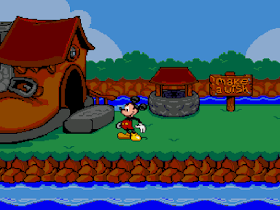 Genre: Puzzle
Perspective: Side view
Visual: 2D scrolling
Interface: Direct control
Setting: Fantasy
Published by: Hi-Tech Expressions
Developed by: Designer Software, WayForward Technologies
Released: 1994
Platform: SEGA Genesis / Mega Drive
Disney game with two characters - Mickey and Minnie. Falling asleep with a book in hand, the chosen hero finds himself in a fairy-tale world. There you need to complete several simple puzzles (the difficulty of which depends on which of the three difficulty levels is selected), thereby earning useful things. These items are then exchanged for magic beans, which allows you to summon a giant sprout that leads straight to the sky. A giant is sleeping here, and in order to wake him up, you need to collect a picture of an alarm clock. That's the whole game.
‹
›
Home
View web version