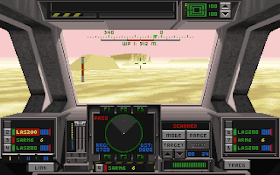 Genre: Simulation
Perspective: 1st-person
Vehicular: Mecha / giant robot, Vehicular combat
Setting: Sci-fi / futuristic
Published by: Sierra On-Line
Developed by: Dynamix
Released: 1994
Platform: DOS
Correct me fans of this game series if they are reading this review, but EarthSiege was originally planned as another game in the BattleTech universe. But at some stage, the developers had to give up the license and create their own world in which the events of this game take place.
Earthsiege is very similar to MechWarrior 2. Great graphics for its time, slightly simplified physics model, changes in terminology (robots are called HERCs, not Mechs), different names for the same types of weapons that you can hang around your steel friend . But in the end, Earthsiege is still the same fighting robot simulator, not better, but not significantly worse than MechWarrior.
‹
›
Home
View web version