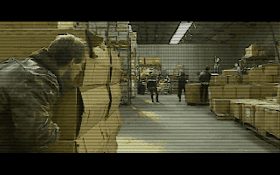 Genre: Action
Perspective: 1st-person
Art: Video backdrop
Gameplay: Shooter
Setting: Cyberpunk / dark sci-fi
Published by: Virgin Interactive Entertainment
Developed by: Cryo Interactive Entertainment
Released: 1996
Platform: DOS
As I have repeatedly written: it is difficult to achieve something strikingly new in the rail shooter genre - the differences are purely technological. But, as with other originally arcade games, with the transition to home platforms, they began to acquire their characteristic features under the influence of the environment, and the general mood of the time. And Hardline, a game of French origin, is no exception.
Cryo Interactive managed to get their hands on multimedia projects long before the calluses in intimate places began to bother the cash cow. Even before the release of Myst, which spurred people to buy a new device, they managed to make a couple of games that use the capabilities of the CD, and work with the most multimedia console of the time - Philips CD-i.
Therefore, a rail shooter simply has to stand out from them. So it is: firstly, a variation on the theme of first-person shooters, which is also more than a popular phenomenon, is used here, secondly, light elements of adventure - simple puzzles and inventory, thirdly, exclusively live video with actors. The French even managed to shove a love scene into the game, which probably affected its rating, although France has historically had a much more relaxed attitude towards the topic of sex than in the States.
But the joy of real video on the monitor screen was usually offset by the third-dimensional actors, the budget of the scenery and the noticeably frivolous approach to filming. In Hardline, the approach is more detailed: although the actors are not stars, they are professionals, and the video was shot on normal equipment - the operators did not shy away from using different shots. But still, it smells of not the best class B films. Interestingly, David Cage, the creator of a number of modern interactive films - Fahrenheit and Heavy Rain, lit up among the developers.
In the near future, namely in 1998 (haha) the technofetishist sect, worshiping an incomprehensible device, has grown to enormous proportions. The army and police were powerless to resist them. Brainwashed sectoids were not averse to shooting at people who were ideologically alien to them, and such is the local hero - a helicopter pilot who answered the SOS signal and landed in the zone of cleansing by adherents of popular religious teachings. Under the guidance of the player, he will have to learn how to kill mercilessly and massively in the shortest possible time. And opponents, ranging from foot soldiers to robots and tanks, were brought here in abundance.
The action part is done very well: cultists have a different number of hit points, different types of weapons differ in damage and damage zone - not bad for a shooting range, right? And you can’t call him easy - he hesitated a little, and long live indoctrination. Fortunately, as in every normal PC game, you can save everywhere.
The difference also lies in the expressed storyline: the hero sees dreams, conducts dialogues with other characters, his development is shown, which brings Hardline closer to traditional cinema. Not all the action comes from the first person - only shooting, and all the video inserts show the hero in the flesh.
Now about not the most pleasant - the video in the game is shown in interlaced mode, i. tiling is used, where half of the lines on the screen are missing in order to save resources. It’s unpleasant to look at this for a long time - the eyes get tired of straining and complementing the picture (when starting the Windows version, there should not be such a problem). At the same time, the video in it is in 16-bit color, which, after the darkness of titles with a palette of 256 colors and a resolution from matchboxes, is very, very nice.
Hardline is definitely a product of its era: the emphasis is on the form, the visual part, but the content is also not bad by the standards of the genre - a certain balance is maintained between the interactive and non-interactive parts. It's hard to say if it brought something new to the genre, but a couple of interesting ideas, originality and, not least, the duration - Hardline will take at least a few hours to complete - make it stand apart from many other rail shooters, especially those that came from gaming machines.
‹
›
Home
View web version