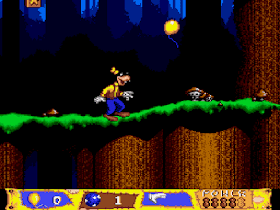 Genre: Action
Perspective: Side view
Visual: 2D scrolling
Gameplay: Platform
Published by: Absolute Entertainment
Developed by: Absolute Entertainment
Released: 1993
Platform: SEGA Genesis / Mega Drive
The Museum of History needs a cleaner. Without thinking twice, the museum curator, Professor Drake, chose Goofy for this position (probably, he had not had the opportunity to get to know him better before). The mission is very responsible, because tomorrow is the opening day of the exhibition, and we must try not to lose face.
But as luck would have it, Pete, a direct competitor for the position of Goofy, cut through the conversation and now he will do his best to fix the mess in order to do more harm to us and take the place of our hero. We won't allow it!
Despite the fact that the game is aimed at a children's audience, fans of the genre will find a lot of interesting things in the game for themselves. Nice graphics, relaxing music and unobtrusive gameplay will allow the player to enjoy spending a couple of hours with the unlucky Disney hero.
‹
›
Home
View web version