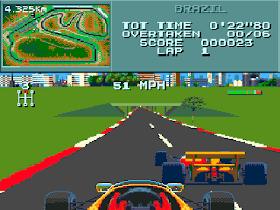 Genre: Racing / Driving, Simulation
Perspective: 1st-person, Behind view
Vehicular: Automobile, Track racing, Vehicle simulator
Setting: Oceania
Published by: Domark Software, Tengen Inc.
Developed by: Lankhor
Released: 1993
Platform: SEGA Genesis / Mega Drive
The game is made under the exclusive license of FOCA (now FIA). And this means that the game contains real tracks of the F1 championship. What immediately pleases when you first get acquainted with the game is an engine built on vector graphics (an object is built point by point, and then the processor draws it). This solution gives a sense of pseudo-3D, a sense of reality. Although in reality the engine turns out to be very raw: often jumping at high speed on rivals or posters, you just jump over them, rather sharp brakes that cannot be adjusted and poles standing along the edges of the track (they are absent in real tracks). Tire wear does not affect handling much. The settings for your car are kept to a minimum and insignificant. All this makes the game feel like an arcade game. The pluses include magnificent models of cars of rivals, the choice of passing the stages of the season to your taste. Summary: the game is pleasant in terms of gameplay and worthy of acquaintance, if only out of respect for the developers.
‹
›
Home
View web version