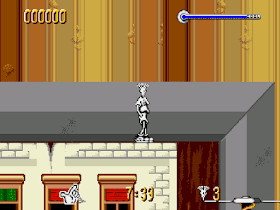 Genre: Action
Perspective: Side view
Visual: 2D scrolling
Gameplay: Platform, Puzzle elements
Published by: Kaneko
Developed by: Teeny Weeny Games
Released: 1993
Platform: SEGA Genesis / Mega Drive
A game about the popular character Fido Dido, which was drawn by Joanna Ferrone and Sue Rose. In 1988, the rights to Fido Dido were bought by PepsiCo. For greater promotion and promotion of the products he advertised. The game was released unlicensed from Sega. This character was later replaced by Cool Spot. But in the 2000s, Fido Dido returned.
The story of the character is somewhat similar to the story from the game Comics Zone. Fido Dido is a hand-drawn character, not painted, and most of the characters in the game are not painted. What gives originality and zest to the game. In the game, in addition to the main platformer, there are various bonus levels. We walk around the level and collect various items, for example, a pencil, they can draw blocks in order to get to a hard-to-reach place.