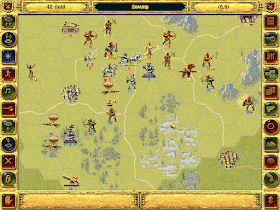 Genre: Strategy
Perspective: Top-down
Pacing: Turn-based
Gameplay: Turn-based strategy
Setting: Fantasy, Steampunk
Narrative: War
Published by: Mindscape
Developed by: Strategic Simulations
Released: 1996
Platform: DOS
Another game in the famous series of "generals" from SSI, but it has nothing to do with the events of the Second World War, and it has nothing to do with the history of our world. In the once flourishing and fragrant world of Aer, there is an urgent need to clear the surface from the yoke of the "Dark Lord", and for this you can choose one of the heroes (read - generals), each of which has its own specific advantages and a different set of creatures in the armies.
Creatures, in general, are an analogue of the same infantry, armored vehicles and artillery from traditional wargames in a fantasy way, although not without innovations. For example, such a type of “technique” as magicians appeared - in addition to a simple remote attack, they can cast various spells on enemy soldiers (by the way, both the player and the enemy general have the same feature). Subordinates are divided into three categories: mortal, magical, and mechanical, each of which has units of all types. The first are the weakest, but also the cheapest and do not have critical vulnerabilities, magical creatures and constructed ones have bonuses against each other, but are stronger than mere mortals. New means of destruction are obtained in a slightly different way from the original games: after each operation (successfully carried out, of course), the general is paid a certain amount, which can be either determined for the purchase of units or invested in the development of monster building. And there is a chance that by the next battle it will be possible to replenish their ranks with a giant spewing hydrogen sulfide. Although this is not the only way to increase the number of troops: during the game, third-party volunteers can join the army as a bonus for capturing the city, or even "heroes" - unique units that will remain under your command permanently.
Also, unlike Panzer and etc. General, on the battlefields, again after the capture of the city, you can find artifacts, that is, items that improve the characteristics of your "gangs"; it can be new spells, and things that directly affect the strength of attack / defense.
The game system has changed quite a lot: in Panzer General each unit had 14 parameters, while in Fantasy G. only half of this number with the corresponding changes in tactics and strategy, you no longer need to delve into the essence of what is happening in order to achieve success. Although the backbone, of course, remained the same - under the command of the player are the main (core) units that gain experience in battles and move from one campaign to another, and auxiliary ones that fight on a temporary basis. Each campaign is a global map, where the enemy stronghold serves as the final destination, and in order to get to it, you need to participate in local conflicts, each time choosing one of the two. But the cards are surprisingly stereotyped and the same, and the sense of a little non-linearity rolls to naught. Otherwise, the game is identical to other "generals", and basic information can be gleaned from the reviews for them.
‹
›
Home
View web version