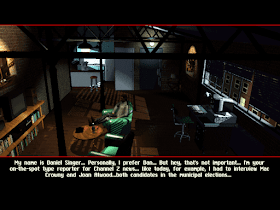 Genre: Adventure
Perspective: 1st-person, 3rd-person
Narrative: Detective / mystery
Published by: Microids
Developed by: Microids
Released: 1996
Platform: DOS
We present to your attention one of the first games in the Adventure genre from the famous French company Microids. Evidence: The Last Report - a real detective story with investigation, chases and shooting.
We have to play for Channel Z reporter Daniel Singer. His colleague Sarah Hopkins calls and asks to come - she found important information. Our hero does not have time to get to her - Sarah was killed, and the police have already found the body. Since Singer and Hopkins were in a close relationship and recently broke up, the first suspect, of course, is a reporter. Our mission is to find the real killer.
The main part of the game is an ordinary quest with finding the right items, communicating with people, and guessing passwords. In the lower left part of the screen there is an inventory, in the right - action icons: look, take, apply, talk. In general, we are looking for information in the found notes and in conversations with witnesses. New locations will appear on the global map of the city - they can be reached by car or train.
The game could be considered a "pure" representative of the Adventure genre, if not for one thing: Evidence: The Last Report has a large number of inserts from other genres - however, it is possible to skip them. We will have to shoot enemies in the basement of the hospital and in the "subway" with a DOOM-style first-person view, chase the criminal in a car, race on boats and even face the enemy in a pool game. These inserts are organically woven into the game, and we are presented with a truly integral detective story.
In principle, Evidence: The Last Report is linear, and the plot develops only when the necessary actions are performed, but, for example, we can never get into the police during the passage, and if we still have to answer the investigator’s questions, then with certain answer options we will be released, but if you say something wrong - Game Over. In general, there are several ways to die: the guards in the hospital can kill us, we can choose the wrong line in a conversation with a criminal, and so on. It is easy to die in first person, as the basement labyrinths are quite intricate and there are a large number of enemies, but it is possible to find both a first-aid kit and ammo.
In the quest component of the game, control is carried out with the mouse, here you can also make save game. In arcade inserts, we operate using the keyboard, and there are no saves.
Graphics for the year of release looks decent, there are videos on the game engine. Music corresponds to the detective genre and keeps you in suspense.
For fans of ordinary quests, the game may seem complicated, but it’s still worth trying to participate in an exciting story. For those who are not afraid of the multi-genre nature of Evidence: The Last Report, you need to walkthrough it unambiguously.