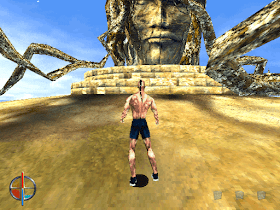 Change resolution: F1,F2....F6 (F3 by default)
Genre: Action
Perspective: Behind view
Pacing: Real-time
Gameplay: Puzzle elements
Interface: Direct control
Setting: Fantasy
Published by: Cryo Interactive Entertainment
Developed by: Cryo Interactive Entertainment
Released: 1997
Platform: DOS
Probably, every person at least once dreamed of being transported to the world of dreams and fantasies, to stay there a little more time than that which falls during a lunch break or an anxious night in the middle of a working week. Who knows what can be found among the dreams, what wonders they have in store for us? Dreams to Reality is a game that makes a guess: what would a person's adventure be like if he got into the realm of imagination? No one can know the exact answer, but if you are the same dreamer, if your soul longs for magical wanderings, then welcome to this amazing and beautiful world - the World of Dreams.
By coincidence, a boy named Duncan, unwittingly, discovered a portal that took him to another world, adjacent to the usual one. Returning from a chaotic journey of which he had little to no memory, Duncan saw a group of scientists who tracked the location of the portal and jumped in after it opened. Ten years later, the strengthened young man again returned to the place of contact of the two worlds in order to finally find out what awaits him on the other side and what scientists have managed to do during this long time. Taking a deep breath, the young guy jumped right into the whirlpool flickering with magical light ...
This is the plot of the game, and in the course of action it will receive a truly epic continuation. But back to the gameplay. What awaits the player after arriving in the World of Dreams? Here Dreams to Reality will not cease to amaze you until the very end. First of all, of course, the world itself is impressive. Outwardly, it consists of seemingly small islands, floating freely in space and placing small stone structures and sculptures on them. However, being inside a fantasy, one cannot be sure of anything. It is not at all necessary that the inner part of these islands will coincide in volume and shape with the outer one ... This is how the understanding comes that the islands themselves are, in fact, only doors through which you can get anywhere - both into a small stone temple and straight into a magical lake. .. Each new place that you will see will be very different from what you already know. No less interesting will be the inhabitants of the World of Dreams. Multi-colored gnomes, huge praying mantises, mechanical clowns, animated statues - this is just the very beginning of the list. Someone will not mind helping you, pointing you in the direction, giving you a useful item. And it’s better not to approach someone, otherwise a fight cannot be avoided. Not all creatures can be interacted with, but even completely silent inhabitants of this world affect the gameplay, because they make the environment lively, colorful, absorbing! How do you like, for example, flocks of fish flying through the air? Or a kitten in an underwater mask exploring the depths of a pond? Surely, we have fallen straight into a fantasy.
The hero of the game himself is a topic for a separate discussion. Duncan is not only superbly developed physically and is able to fully control his body in any situation, but also has an excellent command of magic. Moving around is often much more convenient in flight. After all, everyone flew in a dream, what prevents you from doing it here? But it is quite possible to walk on foot, or even rush to the target on a flying board or on a motorcycle, when you meet them. If it comes to a fight, you are free to choose what and how to fight. Here and just bare arms and legs (nevertheless, very effective), and a magic bow, and a sword, and the ability to become invisible for a while, and much more, including even the ability to move into the enemy! Each skill can be improved as the game progresses, and there are a lot of options for using all this, it all depends on your personal preferences. Of course, special energy is spent on each action - mana, but replenishing it is not difficult, just catching blue balls flying around is enough.
Although you will have to fight quite often, fights are not the main component of the gameplay. Finding various items and applying them in the right places is what will allow you to get out of difficult situations and help friendly gnomes. And it’s worth helping them, because thanks to their tips you will never get lost and will know what to do next.
Not to mention the insanely beautiful gameplay cutscenes, showing in detail every important action Duncan takes and every transition to a new area. These videos are so organically woven into the gameplay that sometimes you don’t even notice that the computer has already taken control of the hero and the next plot scene has begun. Naturally, this has the most positive effect on the already deep atmosphere of the game.
Definitely, this is a game for you, dreamers, for those who have kept a spark of fantasy in their souls, who have always wanted to be transported to a world where feelings dominate the mind. If you are not afraid of the surrealism of what is happening, by no means pass by Dreams to Reality and help Duncan again bring balance to a reality so unlike the usual, but closely related to it - the World of Dreams.