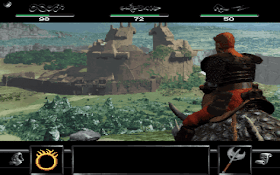 Genre: Action, Adventure
Perspective: 1st-person
Gameplay: Fighting
Setting: Fantasy
Published by: Interplay Entertainment Corp.
Developed by: Cryo Interactive Entertainment
Released: 1997
Platform: DOS
Werner von Wallenrod was greatly mistaken, deciding that after the exposure of his father's killer, his troubles were in the past. They didn’t even have time to formally knight the young man, when the Duke Eragg, who broke into the solemn ceremony, accused the hero of imposture: they say, present your dragon, boy! Like it or not, but Werner has to leave the barely found castle and serve in search of the ancestral dragon Maarach, who has not submitted news for a long time. As soon as he flew out of the house, he was attacked by a flock of aggressive fire-breathing creatures and survived by a miracle. Suspicious coincidence...
In the second part of the dilogy (originally Cryo planned three parts, but the final series did not work out), the developers decided to move away from the concept of pure adventure and reveal the product of the intersection of several genres. The result was questionable, but more on that later. The adventure aspect differs little from its predecessor: the hero roams the world, stuffing little things into a travel bag for their subsequent use in the right places, talking with the local population in the hope of attacking Maarach's trail. Separately, it is worth noting that the change of time of day - sunrise and sunset completely change city life. The plot of the game compared to The Legend Begins has progressed significantly and, despite the general touch of pathos, periodically pleases with unexpected twists.
Like most Cryo games, the visual side of Dragon Lore II is very well done: brilliant videos, beautifully drawn backgrounds, full-fledged three-dimensional characters, high-quality voice acting. In 1996, the game was a real technical breakthrough. Why did I jump to the description of graphics so early? Because, alas, with other components the situation is by no means rosy.
The lion's share of rotten tomatoes will fly to the address of the interface. It was developed either by a non-humanoid alien from outer space, or by a pest sent by competitors - there is no other way to explain its terrible inconvenience and unintuitiveness. The author of a "brilliant" find with no main menu at all should be fed to the dragons: watching Werner's unmissable trip to the armory after each launch of the game and each lost battle is insanely angry.
Didn't deserve good words and Action/RPG elements. Neither significantly expanded statistics, nor mouse mastery have a serious impact on the success of battles - only magic helps (now available from the very beginning of the game, it is almost completely reoriented from the adventure aspect to the combat one) and the mysterious random. Werner forgot how to regenerate, which gave rise to constant headaches "where can I get more healers?" Fortunately, in the city there is always an inexhaustible source of capital at hand - a couple of dice players, but extracting hard cash from them will take a fair amount of time.
The interface also ruined the last major innovation - jousting tournaments. Knocking out rivals from the saddles was supposed to be fun entertainment, but it became hard work: it is extremely difficult to hit an opponent with a spear several times in a row, and if the hero made a mistake with the choice of a horse, then it is completely impossible. On top of the whole schedule, during the fight, it brings to mind the beginning of the nineties, but these are already trifles.
This is such a controversial game. It is strictly not recommended for beginners to take it, and experienced gamers should think about whether they are ready to fight with the interface for the sake of a great adventure part, put up with miserable action inserts and risk falling into a scenario dead end.
‹
›
Home
View web version