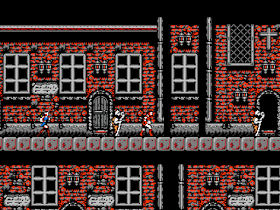 Genre: Action, Role-Playing (RPG)
Perspective: Side view
Visual: 2D scrolling
Gameplay: Metroidvania, Platform
Setting: Europe, Fantasy
Published by: MICHmede
Developed by: MICHmede
Released: 2002
Platform: DOS
Dracula's Shadow is a fan-made game related to the Castlevania series based on Castlevania II: Simon's Quest.
The plot has not changed much compared to the aforementioned game - Belmont and his partner, killing evil spirits along the way, collect the remains of Count Dracula so that he does not return to Earth.
In terms of retaining the elements of the original game, Dracula's Shadow looks just fine - all the features of Simon's Quest have remained in place. Day and night still succeed each other, you can talk with passers-by and buy something from them, etc. The number of items increased to seven.
Graphically, the game is stylized as the NES game system, only with more saturated colors. However, some images, such as character portraits, are obviously taken from another game and are carelessly stretched.
Despite the player having two lives, the continuations are endless, making the game fairly easy to play through. The result is a good arcade game, recommended for those who have passed the original game.
‹
›
Home
View web version