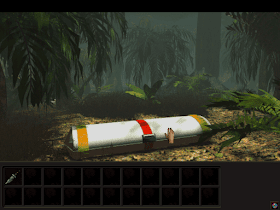 Genre: Adventure
Perspective: 1st-person
Gameplay: Puzzle elements
Narrative: Detective / mystery, Horror
Published by: Viacom New Media
Developed by: Illumina Productions
Released: 1995
Platform: Windows 3.1
A quest with a plot that is completely devoid of the spirit of adventure and adventurism is more likely to turn into an insipid collection of puzzles and ordinary search-collective riddles, and in this case, either the most undemanding players, or those who understand the purpose of the genre too literally, will "survive" to the final - everything that is not connected with puzzles is secondary for them. Despite the presence of the aforementioned components, Congo the Movie: Descent into Zinj, released almost immediately after Frank Marshall's rather successful film "Congo" (which, in turn, is an adaptation of the novel of the same name by Michael Crichton), did not make a splash and was not universally popular. However, having remained in the shadows, the game has not ceased to be a sufficiently exciting and interesting adventure.
Echoing the film, the plot, albeit replete with most of the clichés of the adventure genre, tells about the rescuer Jack, who was hired by the powerful telecommunications corporation "TraviCom" in order to find a deposit of rare diamonds lost in the depths of the jungle - and the path leads straight to the ancient legendary city of Zinj. It is these precious stones that are able to bring the technologies used by the corporation to a fundamentally new level and put it beyond any competition for many years. Along the way, Jack will also have to find out the fate of the expedition sent earlier to the Congo (the second in a row), led by a female scientist Karen Ross - the signal disappeared, and a group of archaeologists stopped communicating. A dashing (according to old memory) jump from a helicopter into the very heart of the impassable jungle - and it immediately turns out that Karen and her comrades were attacked by bloodthirsty gorillas, the appearance of which is difficult to determine even Jack's portable computer; ancient diamond mines are under the reliable protection of vigilant and incorruptible guards (which is what the hero is told by the hieroglyphs on the surviving walls of the centuries-old ruins); the guide, who was supposed to point out a relatively safe route through the territory of not very friendly local tribes, is dead; and Travis - the head of the corporation - is so interested in these unique diamonds that without a twinge of conscience he is ready to sacrifice anyone who takes part in the search - or all, if necessary. However, despite the streak of bad luck that began right after landing in the wilds of the rainforest, Jack also finds a very unexpected assistant - the talking gorilla Amy, Karen's favorite, who played an important role in the film and will help Jack out more than once in the game.
The journey in the surroundings of the untamed jungle begins quite interestingly and dynamically - even despite the fact that the main intrigue is revealed at the very beginning - only one or two cards will be missing in the deck laid out on the table: they were saved for the finale. In order to enhance the "presence effect" at the scene, the authors resorted to a first-person view: we will look at the surrounding riot of primeval nature and the preserved buildings of the mysterious creators through the eyes of Jack. TraviCom technologies are also available - in the process of research and search, you will have to photograph and recognize symbols, record noises, view a map of the area, send and receive video messages from Karen and Travis and access some information contained in the computer's memory - all this contributes a certain variety in the gameplay. The first positive impression is somewhat spoiled by the subsequent arcade part, namely, the enumeration of the correct directions of movement inside the cave labyrinth on the way to the diamond mines. You will have to act quickly, since the caves are inhabited (the mention of "secret guardians" here absolutely justifies itself). In terms of the implementation of the mysteries, the underground part of the game shifts somewhat towards the first Myst (no matter how trite such a comparison) - levers, spinning rooms and strange structures of the underground Temple. Although fans of this kind of puzzles will certainly be satisfied.
To summarize, the game, not reaching the concept of "masterpiece" in any position, however, is quite a worthy creation of its time. Short (aside from trippy moments), with good graphics and unremarkable music that is constantly drowned out by environmental noises, Congo is still an adventure story with all the must-have trappings of the genre, which has remained untold for too long and not enough noticed by whom. Maybe it's time to change that?
‹
›
Home
View web version