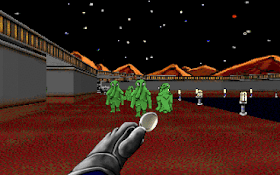 Genre: Action, FPS
Perspective: 1st-person
Gameplay: Shooter
Setting: Sci-fi / futuristic
Published by: Ralston-Purina
Developed by: Digital Cafe
Released: 1996
Platform: DOS
A first-person shooter based on the Doom engine without pronounced violence and with a lot of humor; apparently - it was created as an advertisement for some kind of corn flakes for breakfast and at the same time - a stimulus to buy them: discs with the first episode of the game were put into boxes with "compound feed"!
There is a plot: the action takes place on the planet Bazoik, the place where the main storage of IFC (Intergalactic Federation of Cereals) nutritional products is located, which is attacked by evil green-skinned slug-like aliens flemoids who eat these products. The protagonist of the game is a man in strange square armor, who must stop their invasion (maybe it means that he himself is a clapper).
View, of course, from the first person, there are only three types of weapons - bootspoon and zorcher, as well as a "teaspoon" (analogous to a fist with brass knuckles from Doom), but with the possibility of serious improvement of all three (although at the end of the game there will be a fourth weapon). The energy improved zorcher allows you to "send home" flemoids (that is, you cannot kill them). The main character cannot be killed either - the flemoids only splash him with their mucus, and if he is splashed all over, then he just stops (and the game ends). For partial protection against this mucus, the same square armor - Chex - is used, which can be “replenished” (apparently, cleaned) during the game. Oddly enough, food plays the role of first-aid kits in the game (although it is not very clear how it can cleanse us of mucus): fruits restore health by ten percent, vegetables - by twenty-five, water - only by five; sometimes in the game you can find a "full breakfast" (a plate of cereal, a glass of milk and some fruit) - it immediately raises health to the maximum mark.
The graphics of the game are similar to Doom - the same 2.5D, but much brighter. In general, a good game, perhaps quite suitable for children, but hardly interesting for a true connoisseur of old shooters (especially since it falls short of another non-violent shooter, HURL); however, you can still play. 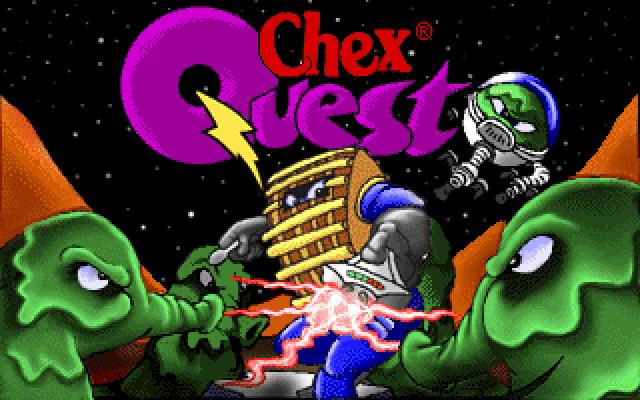