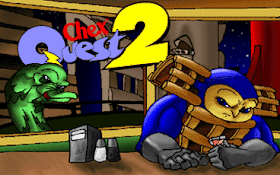 Genre: Action, FPS
Perspective: 1st-person
Gameplay: Shooter
Setting: Sci-fi / futuristic
Published by: Ralston-Purina
Developed by: Digital Cafe
Released: 1996
Platform: DOS
Chex Warrior returns to his planet, the city of Chex, and discovers that the threat from the insidious flemoidus has reached his native lands. Grabbing a zorcher, our hero rushes to save his beloved home. He breaks through the spaceport, cinema, museum and city streets, then reaches the sewers, where he encounters the main villain of the flemoidus - Maximus!
The continuation of the adventures of the "cereal warrior" taken out of the Chex quick breakfast box. To play this add-on, you did not need to go to the store and fork out for a pack of cereal, just go to the official website of this product and download it for free, but despite this, you need to have the first part with you. That is, we are dealing with an addon-sequel. Oh those marketers!
Since the first part, no work has been done with the interface and the outside world. All the same first-aid kits-fruits, all the same bulletproof vests-flakes, all the same enemies - green and slimy flemoidus, generously splashing you with their ... ahem ... slime. The number of varieties of them is not so great: worms, upright, large, etc. The main character is still the same little man (who, according to some sources, is called Fred Chexter) in a square suit resembling cookies, already keeping more weapons in his pockets than before. The Doom engine - id Tech 1 is still responsible for the graphics of the game. Based on everything written above in this paragraph, do not expect anything new. Only levels can be called new in the game, but they do not please with a large number - only 5 - and, of course, magnificent beautiful art that appears in the main menu.
The weapon has a big minus: the cartridges of the first zorcher (i.e. pistol) run out after a little time, and you have to exterminate (and in this case return to your home planet) opponents with a spoon, which is very inconvenient and increases the chances of complete splashing.
In general, before you is a good game, made with virtually no improvements to its "ancestor" and still focused on a children's audience.