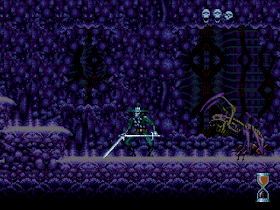 Genre: Action
Perspective: Side view
Visual: 2D scrolling
Gameplay: Platform
Published by: SEGA of America
Developed by: Extended Play
Released: 1992
Platform: SEGA Genesis / Mega Drive
Chakan: The Forever Man was inspired by a little-known comic book of the same name by Robert A. Kraus. The comics recounted the misadventures of Chakan, a powerful warrior who once made a deal with Death. The deal was that Chakan and Death would meet in battle. Chakan wins - gets eternal life. Death wins - takes the soul of Chakan. Coin, as you might guess, won, but Death was more cunning. As a punishment for self-confidence and arrogance, Chakan will see every night in a dream all kinds of evil spirits and the pain of the victims of this evil spirits will become his pain. And he can find peace only when he destroys all the supernatural evil in the world.
The game takes place a thousand years after the fight with Death. Chakan left to destroy eight fiends - Mantis, the Spider Queen, the witch Elkenrod and the Dragonfly king, as well as four elementals.
Graphic and sound performance leave a double impression. On the one hand, the graphics do not shine, to put it mildly - dull and grainy, and the music is not performed in the most pleasant way. On the other hand, the disadvantages of graphics are redeemed by excellent design, and music - by the quality of compositions. As a result, both elements create a unique dark atmosphere of the game, somewhat similar to the atmosphere of the notorious Legacy of Kain.
The control layout is standard: A - change weapon / potion, B - hit with the current weapon, C - jump. In addition: holding B and pressing the D-pad buttons can strike in eight directions, twice C - double jump (and during it you can press B and strike nearby enemies), C in the crouch position - somersault (at the end of which you can also perform a blow ). The control itself is convenient, there are no delays.
The gameplay is an action-platformer with a touch of adventure. Over the course of eight nightmarishly difficult levels (each of which consists of three sublevels), we have to find and destroy the incarnations of evil, and this must be done at a given time (otherwise the level will have to be completed all over again). Each level is dedicated to one of the elements - fire (Elkenrod, fire elemental), water (Mantis, water elemental), air (Dragonfly King, air elemental) and earth (Spider Queen, earth elemental). At the first levels, you can find weapons that are necessary in certain situations (for example, to advance on one of the sublevels of the Spider Queen, you just need a scythe from the first Elkenrod sublevel), and bottles with potions are scattered throughout all levels. Potions are needed for the most interesting element of the game - alchemy. Potions are also dedicated to the elements and there are four types of them, you can distinguish them by the appearance of the bottles. There are blue (water), green (earth), red (fire) and white (wind). From two bottles, one of twelve spells can be performed. The spells are quite useful and varied, among them there are critical ones (like flipping the sandbox in the interface, which is necessary to reset the time limit to zero).
The most notorious aspect of the game that has put many players off is its extreme difficulty. Why is the game so difficult?
First, the abundance of traps on the levels. And if at the first levels they are still nothing, then at later levels it can come to instant death.
Secondly, the abundance of enemies. As luck would have it, the enemies are either small and fly along trajectories that are very inconvenient for a strike, or they tend to shoot something (and given the terrain, there is often nowhere to retreat, behind some kind of hole). And at later levels, things can also go to instant death.
Third, the time limit. By itself, it is not fatal, but the fact that its reset leads to the fact that the entire level must be restarted from the very first sublevel can make some people turn gray.
Slightly compensates for all the above lack of a life-continuation system as such - if Chakan dies, he simply returns to the level selection screen and can resume the game from the same sublevel. However, the game is still difficult.
At the end of eight levels, the player will expect an unexpected and unpleasant ending for the main character, and after the credits it will be possible to fight another boss. There is only one attempt and the boss is just a nightmare. So nightmarish that when you defeat him, you will see the "real" ending, in which you will see the hourglass until the end of time.
This is how the game came out. Atmospheric, interesting, with a good plot, but my God, what a complicated one.
Summing up, I must say about how the fate of Chakan. In 2000, a sequel was in development that chronicled Chakan's travels in different worlds, from fantasy worlds to cyberpunk. Unfortunately, the game never came out and it is not known if it even reached the alpha stage. A lot of her concept art formed the basis of the game Blood Omen 2 from the aforementioned Legacy of Kain series. At the same time, a film based on the comic book has entered the production stage. The comic itself is still being drawn and Robert Kraus is alive and well, so the adventures of the Eternal Man are far from over.
‹
›
Home
View web version