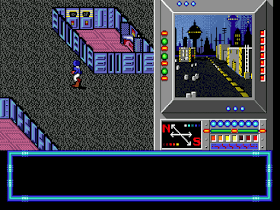 Genre: Role-playing (RPG)
Perspective: Diagonal-down
Visual: Isometric
Pacing: Turn-based
Setting: Sci-fi / futuristic
Published by: Electronic Arts
Developed by: Strategic Simulations
Released: 1991
Platform: SEGA Genesis / Mega Drive
Quite a complex and good RPG. With a bunch of different settings and functions. At the beginning, you choose the class and race that your player will belong to. Then you can make a few more settings up to programming. This RPG may not be understandable to fans of JRPGs and other similar games. The plot of the game is quite large and detailed and is partly based on the classic newspaper comics of the 40s.
Actions in the game develop during the war of two (colony) organizations on the planet Earth (New Earth Organization (NEO)) and on Mars (Russo-American Mercantile (RAM)). It should be noted that the colony on Mars was organized by Russia and America. Simply put, the earth is now threatened to be destroyed by the Doomsday Laser. After all, the game is not in vain called Countdown to the end of the world. Now only Buck Rogers and his team can protect the land.
‹
›
Home
View web version