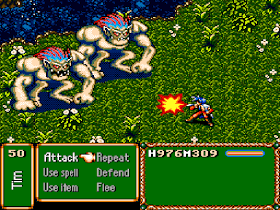 Genre: Role-playing (RPG)
Perspective: Top-down
Visual: 2D scrolling, Isometric
Art: Anime / Manga
Pacing: Turn-based
Interface: Direct control, Menu structures
Setting: Fantasy
Published by: Chuanpu Technologies
Developed by: Piko Interactive LLC
Released: 1996
Platform: SEGA Genesis / Mega Drive
The story in the game is very large, intricate, and very interesting. It starts in a small village, where competitions are held every year in which you need to find a mysterious object. The winner receives the title of a real warrior. We play a hero named Tim. Our hero also takes part in these competitions. After the return of our hero to his village, real adventures begin.
This game has another story not related to the virtual world. This game was made as a response to the popular jRPG game Final Fantasy by ChuanPu Technology in 1996. It should be noted that the developers succeeded. Also, the combat system in the game is similar to the combat system from the SNES game Breath of Fire 2. Some locations in the game resemble locations from other popular RPG. For example, such as Romancing Saga 3, the Fairy Village area is similar to Tata Treetops, the entrances to some temples in Barver Battle Saga resemble the Holy Temple entrance. Ayrshire's character sprites are almost ripped-out Kefka character sprites from Final Fantasy VI.
‹
›
Home
View web version