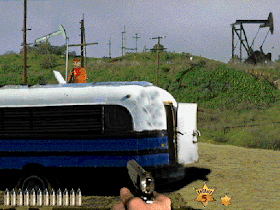 Genre: Action
Perspective: 1st-person
Gameplay: Shooter
Published by: UnderWorld Software
Developed by: UnderWorld Software
Released: 1997
Platform: DOS
Blood Bath at Red Falls uses an extremely simple idea, which can be called in two words - a virtual shooting range.
There are a lot of similar projects, but this game stands out a little because it uses live video in the gameplay.
In Blood Bath at Red Falls, the surroundings cannot boast of originality - we see enemy bandits, we see hostages - the task immediately becomes clear. Some need to be eliminated, while others cannot be touched, they must be saved by shooting enemies. The whole game is one continuous shootout. Alas, a boring shootout that gets boring too quickly.
‹
›
Home
View web version