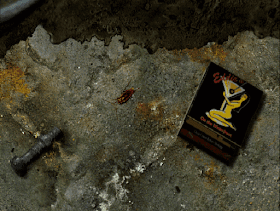 Yes, there is something from the simulator here. In the end: were there simulators of aircraft, helicopters, submarines and other equipment? Were. There were even life simulators of a lion and wolves. Why not be a cockroach life simulator? It is possible that the developers thought so. Who knows though...
In general, we have to move into the skin (or rather, into the shell?) of this insect.
Already disgusting? Then it is recommended to look at the game more fun. To everyone else...

Yes, and from the quest there is also a component here. Although it’s more correct to say that it’s just the main one here: we have to solve puzzles with the forces and means of one cockroach unit, simultaneously trying to survive and not be crushed by someone’s heel ...
The faint of heart, please do not
The game is made very realistic - and although photographs of real things are often used here, even drawn objects look very natural. What is only a half-dead, bleeding rat, pressed by a mousetrap. By the way, it is not recommended to crawl close to her mouth - although she is no longer alive, but not dead yet ...
Well, there are enough other things in the game: dirt, spiders (do you know that they do not disdain to eat cockroaches when there are no flies?), cockroach relatives, some of which twitch in their death throes on carefully scattered poisonous yellow poison, and others and other delights of the old US eatery.

What is it about?

For the description of all the delights of the game, we completely forget about the plot. What is required of us?
So, the main character knocked out funds somewhere (judging by the suitcase of money in the initial cartoon - rather big ones) to create a mega-poison for cockroaches, which will eradicate this evil once and for all. However, like any decent American, our hero decided that it would be wiser to take the money and get up and running. Probably because no poison takes these cockroaches ... In general, on the night of departure, one embarrassment happens - shaking the drawers of the table in search of keys to the room, there is a medallion of the deceased mother of our ward, which without hesitation turns him into .. right - in a cockroach. From now on, control over all his further existence completely passes into our hands, and we plunge into the cockroach world, as well as into the difficult childhood and youth of the protagonist with wooden toys entirely ... The task is simple: to become a man again.

It's up to you to decide. If the words "cockroach", "rat", "dead", "poison", "spiders", as well as their very realistic image do not turn you back, then, undoubtedly, the game is worth watching: it is unique in its genre. You could even say it's the only one. About cockroaches.

Who is missing their cockroaches

For those who still decided, I want to tell you about a few important things:
Well, that's probably all. We crawl out on the road.
‹
›
Home
View web version