Back to the Future Part III (SEGA) 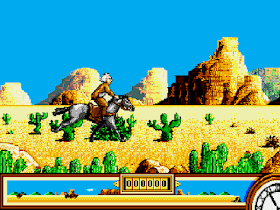 Genre: Action
Perspective: Side view, Top-down
Visual: 2D scrolling, Isometric
Gameplay: Arcade
Setting: Western
Published by: Arena Entertainment
Developed by: Probe Software Ltd.
Released: 1991
Platform: SEGA Genesis / Mega Drive
The game is made based on the movie of the same name where Marty McFly and Doc Brown got to the Wild West. In this game, they have to go through the main scenes from the movie, namely Rescue Clara, we have to ride a horse and dodge various objects. On some emulators, this round is emulated too quickly.
Target Shoot - In the role of Marty, we have to shoot down moving targets, it's a pity that the light gun is not supported by the game.
Marty vs. Buford's Men - Marty needs to get the better of the bandits using pie plates, aka Frisbees.
The Train - Here we will see something like a platformer, where Marty must collect enough explosives, fight off enemies and disperse the train to 88 miles per hour.
‹
›
Home
View web version