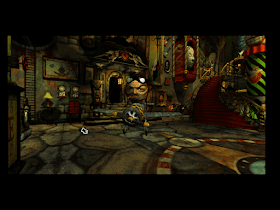 Genre: Adventure
Perspective: 1st-person
Gameplay: Puzzle elements
Published by: GT Interactive Software Corp.
Developed by: Tribeca Interactive
Released: 1996
Platform: Windows 3.1
An adventure game that combines a mystical first-person quest in the style of Myst and an arcade - of course, with the complete dominance of the first component.
"Last consolation" - the name of a huge old mansion, in which there was once a secluded hotel for various refined and creative natures, primarily musicians who wanted to isolate themselves from the surrounding reality with all its vulgarity, rudeness and primitivism, from ruthless critics who do not understand the true the essence of pure art, and from a bored public unable to appreciate the results of the rise of their geniuses. These people lived there for a long time, created and communicated with each other, and at some point strange, mystical rumors spread about the mansion: as if nine muses, known to every person from school, came out of oblivion to settle in this strange place, which became the last refuge of geniuses. Since then, however, many years have passed, all those creators died long ago, and the mansion passed into the possession of a certain Thornston Last. But then his earthly life ended, and your hero - an ordinary person who was a distant relative of Thornston, but did not even suspect of his existence - unexpectedly, having received a letter from the lawyer of the deceased, becomes the owner of the "Last Consolation", which passed to him by inheritance. However, having crossed the threshold of his new home, he quickly realized that the rumors about miracles happening here were not only true, but even underestimated...
We will not reveal the entire plot, as always, but it should be noted that in fact (even if it is written in some reviews), the hero here does not have to fight the "nine evil muses" at all. His opponents will be two demons ("Poisonous Twins") who have terrorized and over the years have perverted the essence of the Art that once reigned in the house, and the key to defeating them and restoring the glory of the "Last Solace" as a temple of true beauty will be the search and repair The machine of the muses, already corrupted by the Twins, who seek to turn art into a weapon of evil...
In terms of gameplay, 9: The Last Resort is close to Myst in many ways: first-person view, discrete movement, mouse control. At a particular moment in time, a character can have only one item, so there is no full inventory; there are no puzzles for combining objects, and the objects themselves are less important here than, for example, the "repair" of some mechanisms or even puzzles based on the performance of music (music plays a big role in passing!). It should be noted that many puzzles are really complex and not quite logical. A special mode of fast travel between the locations of the mansion is available, activated by pressing the key combination Ctrl + M. If you touch the mentioned arcade elements, then there are not very many of them, and they are not very difficult: you will meet a small semblance of a race and a virtual shooting range in which you will have to kill rats .
Graphically, 9: The Last Resort looks very worthy, first of all, not even because of the quality of the picture as such, but because of the truly psychedelic atmosphere cast by the bright colors of the walls and objects in the rooms of the mansion and, to put it mildly, surprising objects located here ; the style of the game can be defined as "a combination of surrealism and psychedelia with a touch of steampunk". Incomprehensible wall decorations, giant sculptures of grinning painted clowns, mechanisms of incomprehensible purpose - all this and much more will be here. Separately, it is necessary to note the participation in the dubbing of the game by many Hollywood stars of the first magnitude, including Robert de Niro himself.
The verdict is great, even if not for 10 points: yes, someone may not like the presence of "action" here, but riddles, being inherently quite difficult at times, almost never cross the line beyond which irritation from their illogicality begins . Well, the fact that a monkey plays some role in the game (it's not just placed on the cover!), already means that this thing simply cannot be bad. For connoisseurs of pure psychedelics from the world of quests - the most sincere recommendations.
‹
›
Home
View web version