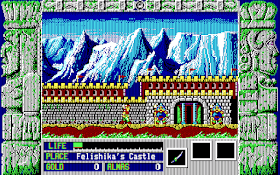 Genre: Action, Role-playing (RPG)
Perspective: Side view
Visual: 2D scrolling
Art: Anime / Manga
Gameplay: Metroidvania, Platform
Setting: Fantasy
Published by: Sierra On-Line
Developed by: Game Arts Co.
Released: 1990
Platform: DOS
Zeliard is a fairly well-known platformer about events that unfolded a long time ago in some thirtieth fairy-tale kingdom-state, located far away from any of the countries known to us.
At launch, you will be greeted with a really long cutscene showing how Evil, which came 2000 years before the events of the game into the kingdom with the strange name Felishika from the dark depths of another galaxy (yes, yes, that’s right!), was defeated with the help of sacred crystals called the Tears of Esmesanti. However, Evil, which, by the way, is personified by a demon with an interesting name (surname?) Jashiin, promised to return and, of course, did not lie.
It all started with a terrible thunderstorm of such duration that "not a single old-timer will remember." On the seventh day of bad weather, a girl of incredible beauty, an angelic voice and a beautiful name, Felicia la Felishika, the princess of the doomed kingdom, came out onto the balcony of the royal palace. As soon as she complained about the incessant storm, the raindrops turned into grains of sand. The beautiful land of Zeliard was becoming more and more like a desert every minute. This was not enough for the insidious Yashiin, and he turned the princess into stone ... This was a mistake. Everyone knows that if a princess gets into trouble in some fairy-tale kingdom, crowds of volunteers will immediately run to save her. Alas, there were not so many volunteers in the land of Zeliard (and those who decided to compete with the demon disappeared in underground tunnels inhabited by various monsters). The sandstorm lasted 108 days. And when the inhabitants were already, apparently, thinking about breeding giant worms and extracting spice, a wanderer entered the royal halls. Not a boy, but a husband (although this is not so obvious due to the peculiarities of the Japanese animation style), Duke Garland volunteered to save the kingdom with a funny name and the princess of the same name. And since the Holy Spirit brought this citizen to Zeliard, it is for him to play.
In general, Zeliard can be called a Dungeon Crawl game. You have to break through the hordes of respawning monsters level after level, killing a unique monster of great power at the end of each of the dungeons. Each of these "royal" monsters possesses one of the Tears of Esmesanti, which Garland needs to defeat Yashiin. Above each of the caves is one of the cities of the kingdom of Felishika. In them, the hero is not in danger. There you can talk with the townspeople, relax or buy new equipment (swords, shields, potions). But be prepared for the fact that in the “kingdoms of decaying capitalism”, even during the wars with demons, you have to pay for everything (and sometimes there is not enough money). How? Fortunately, the social structure of monsters is very close to ours, otherwise why would they carry diamonds with them? These are the ones that need to be collected in the caves and exchanged in the banks of Felishiki.
The game has a mechanism for gaining experience (in a not very explicit form). Every time the fortune-telling elders (there are characters in cities that help you save the game, among other things) decide that you have progressed enough, you will receive a health boost and even learn new spells. What really pleases Zeliard is its combat system. Your character is able to strike with a sword from any position, take cover behind a shield (all shields in the game differ in size and strength), use various combat magic and wondrous magic items (which, by the way, are very diverse). "Bestiary" also pleases with the assortment. If you can't keep up with the fight, or, on the contrary, think that the monsters die too slowly, you can always change the speed of the game.
Graphically Zeliard is made quite well. The lack of colors (MCGA - 64 colors) does not affect the clarity of the picture and does not blind with excessive contrast. The music in the game is excellent.
Recommend to everyone. I would even say that Zeliard is a kind of platform forerunner of the famous Diablo.
‹
›
Home
View web version