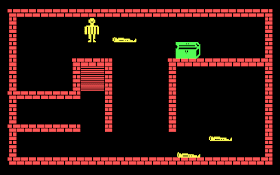 Genre: Action
Perspective: Top-down
Gameplay: Shooter, Stealth
Setting: World War II
Published by: Muse Software
Developed by: Muse Software
Released: 1984
Platform: DOS
Many believe (and believe incorrectly) that Wolfenstein 3D was the very first 3D action game in history. Now that Quake is considered hoary antiquity, this game has moved into the category of historical relics that are at best "forced respect", and few people are able to appreciate its charm and take it seriously. However, Wolfe had and still has fans, and not everyone liked the "remake" of the 2001 game (which has now become an old game itself - time flies ...).
But those fans did not know that when they did not close their eyes at night, unable to tear themselves away from the adventures of Willy in the mysterious Nazi castle, and once again silently sneaked up on an SS officer capable of killing with one shot, someone called the object their love with the same bad words that they will pronounce 9 years later.
Have you ever been embarrassed by the "3D" ending in a game? Have you ever felt like there was something wrong? If so, congratulations, you are on the verge of unraveling this mystery. Now you have a unique chance - to look at the "same", the mysterious "very first" Wulf, without any 3D there.
Yes, we are again (although is this word applicable here?) in a Nazi castle full of enemies and traps. Our goal is to steal secret documents and be able to leave the castle, and it is not known which of these is more difficult. One man against a whole bunch of lurking reptiles. Slowly sneaking, step by step approaching the cherished goal, considering each step, making our way through secret passages, avoiding unnecessary meetings, and when they cannot be avoided, fighting, and striking first, is what awaits us.
The way it all looks can bring a condescending smile even to those who consider themselves "hardened old gamers". Yes, I’ll be honest: it really doesn’t look so hot, it’s 1984. But after a few minutes of playing IT, you completely forget about the graphics: you want to go through the game, and this is incompatible with extraneous unnecessary thoughts.
This game doesn't need "outstanding" graphics to be completely immersive. The sheer complexity of the gameplay will do it. But the graphics, even if "such", may well add a bit of atmosphere: the black background on which the whole action takes place perfectly reflects the gloom and danger of everything that happens.
The point is to play. Play for all fans of Wolfe, Doom, Quake and others to know how it all began. Play for those who believe that the new graphics for games is unacceptable (because compared to these graphics, almost any will be "new"). Finally, for anyone who just loves great and really old games and/or considers himself a "hardcore" player, test yourself in "real" hardcore.
The enemies of progressive humanity are already hiding in their gloomy lair - they are waiting only for you...
‹
›
Home
View web version