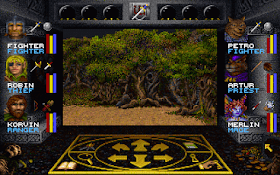 Genre: Role-playing (RPG)
Perspective: 1st-person
Pacing: Turn-based
Setting: Fantasy, Sci-fi / futuristic
Published by: Sir-tech Software
Developed by: Sir-tech Software
Released: 1992
Platform: DOS
Classic DOS version of the game. Despite the much weaker graphics for obvious reasons, this version, according to many fans, is much more convenient and playable.
Wizardry 7: Crusaders of the Dark Savant is a continuation of the Wizardry series of games and, I must say, not bad. The game allows you to manipulate your heroes as you like: train their skills, teach them various spells, or develop their abilities with various artifacts. The choice of characters is very important - it depends on how far you will advance in the passage of this game. That's why it's possible to change a character's profession here even in the middle of the game.
‹
›
Home
View web version