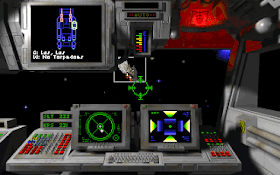 Genre: Action, Simulation
Perspective: 1st-person
Vehicular: Space flight, Vehicular combat
Setting: Cyberpunk / dark sci-fi, Sci-fi / futuristic
Published by: Electronic Arts, ORIGIN Systems
Developed by: ORIGIN Systems
Released: 1993
Platform: DOS
After the triumphant success of the Roberts brothers' first two games in the Wing Commander series, in which the player could try his hand as a space fighter pilot in a brutal war against the militant Kilrathi race, Origin decided to build on this success by releasing a game that differs in concept from the combat space sim, but operating in the same universe.
So…
The year is 2669. You are one of the many private pilots who decided to try their luck on the outer borders of the earthly Confederation, namely, in the newly developed Gemini sector. Colonies and bases have already been laid here, mining and production of goods is underway, trade is developing, but the war with the Kilrathi absorbs all the resources of the Confederation, and it becomes impossible to maintain order and law at the proper level on communications stretched in space, remote from the center of the Confederation.
Due to the lack of forces to maintain order on the border, various criminal groups instantly begin to operate on remote space communications. Pirates are becoming the main threat to commercial routes in space. They ruthlessly plunder the cargo ships that deliver supplies to the growing sector and the needy Confederation.
Pirates rob exclusively out of love for profit, without any ideological considerations, unlike retro. Retro is a sect of religious fanatics-technophobes who preach that all the troubles of mankind stem from the intervention of machines in human life, and their goal is to destroy these machines. They attack absolutely everyone and pose a serious threat to ships moving through the Gemini sector. They hesitate to confront the regular Confederate Space Force, but feel at ease with the undefended frontier. One cannot completely discount the Kilrathi ships that fly into these places. There are very few such ships - most of them are involved in battles with the Confederation.
Since the Confederation cannot restore order on the borders, it was decided to put the matter on a commercial basis. Anyone with a spaceship can try their hand at private enterprise and privateering.
Lots of ways to earn. Do you want to make money legally? Choose the path of a trader and trade goods between systems for profit, or become a bounty hunter if you enjoy fulfilling contracts to patrol or destroy the most dangerous criminals of the conquered galaxy. The relationship between the employer and the contractor is built on the basis of a one-time contract, the money is paid after the task is completed. The obvious principle is followed: the higher the risk, the higher the reward. The funds received for the completed task can be invested in the purchase of new types of ships, in the purchase of technical equipment or cargo for transportation.
Prefer to earn money around the law? Well then, become a smuggler. Transport illegal cargo around the patrols of the Confederate Aerospace Forces and local militia, and you might get lucky. Big risk - big money. Don't like the principle of "buy cheap - sell high"? Then welcome to the filibusters of the Gemini sector. One of the most profitable and dangerous occupations. Rob ships and sell their cargo, engage in the slave trade (after all, the pilot of a downed ship can also be sold), destroy the Confederates and pray for your life, because. no one takes pirates prisoner, and every bounty hunter in the sector will have your face on the wanted portrait.
Conclusion: Privateer has become the first in history to continue the traditions of the great Elite. All the necessary elements of freelancing, a deep developed world and plot, an atmosphere conducive to complete immersion in the game, made the game very popular. After a short time, an add-on for the game Privateer: Righteous Fire was released (it is included in the CD version of the game), adding an additional storyline that continued the storyline of the main game, as well as adding new technical devices to equip the ship.
‹
›
Home
View web version