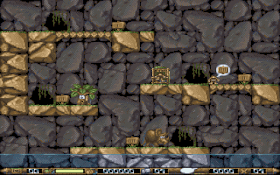 Genre: Action
Visual: Fixed / flip-screen
Gameplay: Arcade, Platform
Vehicular: Flight / aviation
Published by: Play Byte
Developed by: EGOSOFT GmbH
Released: 1992
Platform: DOS
8 years after the release of the cult game Space Taxi for Commodore 64 computers in 1984, a small German development team decided to make their own version, but in the exact opposite environment - now we will have a prehistoric world instead of the future! The unfortunate Neanderthals living on the slopes of stone cliffs were in dire need of a means of transport in order to visit each other, and the resourceful inventor, in order to win the lady's heart, decided to help them and at the same time earn money. He will have to transport the inhabitants under our control in a wooden helicopter with a foot drive.
The main difficulty in the game, which at first can push away an inexperienced player, is control. The flying machine is very sensitive to the control keys and accelerates with a truly jet acceleration - and if you hit an obstacle at too high a speed, you will have to pay with your life. So accuracy here is the main key to success. But the desire to earn treasured multiplier bonuses (like in GTA) on a very fast passenger transfer often makes you replay levels again and again and hit the keyboard in desperation, even after a long workout. But on the Amiga management is even more difficult!
The game is made with love, varied; at each level, the authors tried to add some feature and additional complexity. Somewhere, for example, water begins to rise, and it is necessary to transport all passengers as quickly as possible, somewhere pterodactyls or brontosaurs interfere. There is even a huge sleeping dinosaur that prevents the helicopter from flying with its breath! There are only three types of passengers, but that's enough - each type has a few of its own properties. Also, at each level there is a special stone with eyes - this is the only assistant in the game, with the help of this stone you can extend the level time (this is especially true for playing together), get rid of the pterodactyl, disable the brontosaurus (the stone is activated by the Control key). In general, you will not be bored! In addition, the password system in the game allows you to return to the game even after years!
Separately, it is worth saying a few compliments to the design and graphics in the game. Starting with the palette, everything is done in a single very colorful and at the same time "stone" style. The fonts and numerous cutscenes and logos are very beautifully made. Humans and dinosaurs are very cute and beautifully animated, the game itself ran very smoothly even on weak computers like 386 (I don’t answer for 286, but it will probably work too!). On the Amiga, the water is still very beautifully made.
The game rightfully belongs to the golden fund of classic DOS games, and it is especially worth paying attention to those who like to play arcade games together! The levels there are different from a single player game, so it's especially interesting.
‹
›
Home
View web version