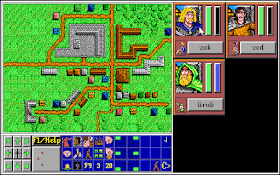 Genre: Role-playing (RPG)
Perspective: Top-down
Setting: Fantasy
Published by: Michael W. Lawrence
Developed by: Michael W. Lawrence
Released: 1994
Platform: DOS
Aethra Chronicles - RPG, similar in style and execution to the first games of this genre. Not the most outstanding graphics even by the standards of that time fade into the background - and is it necessary to focus on it when it comes to an interesting plot, many different classes, hordes of monsters, all kinds of riddles and secrets, as well as a large number of tasks as the main storyline, and secondary?
So, how did the story told by the game begin? A dark cult has kidnapped the royal son to summon a demon into the world, and your brave heroes must banish evil forever. Your mentor and prophet, who lives in your hometown, will become an assistant in this difficult matter. Forward, to snow-capped peaks, areas hidden in swamps, along roads that run through deserts and along the seashore. The game world is quite large and diverse. Cities meet us with new tasks, all kinds of unfriendly creatures are waiting in the open area - from goblins, thieves and other punks to groups of followers of various cults, dark elves and other fiends, including werewolves and other evil spirits. And the game balance, which must be mentioned, is very pleasing here - with each new step that removes you from your hometown, the strength of the enemies also increases. Sometimes it’s not a sin to escape from the battlefield, breaking through the enemy environment, or you can enlist the support of strong heroes in some cities who will fight side by side with you until their task is completed (which, by the way, not necessary).
There are many things in the game, but their properties are hidden from the player; except for items of clothing, the characteristics of which can only be learned indirectly - to put on and see how the parameters of the character change. Therefore, you will have to rely solely on their names and the price from merchants - the more expensive, the better. Also in the game there are goods created by alchemists. The range of drugs with different properties is quite wide and is represented by just a huge number of bottles of all colors of the rainbow, there are even gold and silver ones. However, the properties of each potion found are learned "by experience" - there are no clues to the contents of the bottles. There are also powerful artifacts in the game (to the delight of lovers of magical and ancient gizmos), but, again, their properties are a matter of conjecture.
The character system used in the game is somewhat different from AD&D. Classes differ in their ability to pump certain skills (there are about 20 of them). A separate skill is also a set of spells "Spell list" - the higher its level, the more spells the hero has at his disposal. Of interest is the many areas of magic - about 15, each of which has 10 spells. Many magicians in the future are able to master several of these areas. Spells are very different - just damaging or imposing curses, and there are those with which it is possible to call creatures to help, there are also enchanting friendly units. Along with this, there are some restrictions that are imposed on the equipment of different classes. For example, a magician cannot be put on chain mail or put a sword in his hands. The detailed documentation will provide some assistance to the player, which contains information about the purpose of skills, about control features, about creating a character.
In general, the game is made at an acceptable technological level, albeit with some reservations, and is unlikely to leave indifferent fans of classic RPGs.
‹
›
Home
View web version