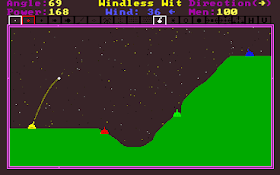 Genre: Strategy
Perspective: Side view
Pacing: Turn-based
Gameplay: Artillery
Published by: Kenneth Morse
Developed by: Kenneth Morse
Released: 1990
Platform: DOS
Do you like explosions? Of course they do! That is why games where you can smash everything and everyone around always get such popularity. A well-known example is the Worms series, but what many call the forerunner of Worms, Tank Wars, pyromania blossoms even more violently: there is only one screen, up to 10 enemies, and the explosions are so powerful that most rounds end in 2-3 turns.
The game has a lot of settings. You can choose rivals (with various algorithms: from the "stupid" who most often just kills himself, to the "super killer" who always hits), adjust the controls, add human players (yes, playing with someone else is even more interesting!) , set the number of rounds, add wind corrections, and so on. After that, the actual game begins. Everything looks quite simple and schematic, but pleasant: the standard MCGA mode (256 colors, 320 by 200) barely allows you to fit 10 tanks on the screen, which hosts a randomly generated monochromatic green landscape without any frills (that is, it is clearly projected onto horizontal axis, unlike Worms). For the sake of a little variety, a background is added, either rather conventional (blue sky, stars), or vice versa - creepy psychedelic circles made using palette cycling over the entire VGA palette. Pretty brutal on the player, but there's something about it (for me personally, this has become one of the main memorable things about the game since I played it in the early 1990s).
The controls in the game are very simple: turn the cannon with the left-right arrows, adjust the shot strength (from 0 to 1000) with the up-down arrows, select a weapon (TAB) and shoot (spacebar). Shots, depending on the level, can either bounce off the walls or fly off the screen. For killing opponents, points are awarded, which can be used to buy weapons between levels. And weapons from Worms will seem childish here: there are ways in which you can easily kill everyone around, including yourself (for example, by hitting the enemy with a 5-megaton atomic bomb). The piquancy is added by the fact that after "death" the tanks can also explode in various ways, so if there are a lot of opponents, then it's in the order of things that they exterminate each other in a chain, and the move doesn't even reach you. Another interesting example is the "ground disappearing" effect. The fact is that if there is no surface left under your tank, then it falls, being damaged in the process. A weapon with the abbreviation CRI (there are several modifications) randomly removes pixels from the ground at the point of impact of the projectile. Here, too, there are several subtleties, for example, that the remaining patches of land can continue to "hang in the air" for another turn, during which the alignment of the battle, quite possibly, will change dramatically. And there are a lot of such small subtleties and tactics in the game; talking about everything will only spoil the impressions of self-study.
Tank Wars by Kenny Morse is one of the reference examples of a shareware game: technically, everything is done conveniently and without bugs, there are many features, and most importantly, addictive gameplay.
P.S.: The game has been in development for several years, the last known version - 3.2 - was released in mid-1992.
‹
›
Home
View web version