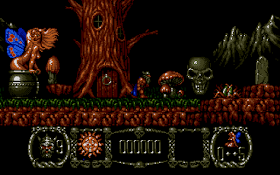 Genre: Action
Perspective: Side view
Visual: 2D scrolling
Gameplay: Platform
Setting: Fantasy
Published by: Hewson Consultants Ltd.
Developed by: Hewson Consultants Ltd.
Released: 1989
Platforms: DOS, SEGA Genesis / Mega Drive
A very ancient, but at one time very famous and released on almost all gaming platforms, a scrolling platformer in a fantasy setting. We have to play as a warrior similar to a barbarian, freeing fairies from captivity, kidnapped by some monstrous villainess. The path of the warrior will pass through various locations-levels (forest, castle, and so on), and various opponents, including dragons, will stand in the way. The bottom line - we walk, kill (whom it doesn’t work out - you can try to get around), collect bonuses, save the fairies.
Perhaps the main advantage of this game is the graphics, which, in my opinion, were five years ahead of their time. A classic of the genre, without a doubt.
‹
›
Home
View web version