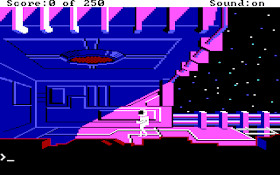 Genre: Adventure
Perspective: Side view
Visual: Fixed / flip-screen
Gameplay: Graphic adventure, Puzzle elements
Interface: Point and select, Text parser
Setting: Sci-fi / futuristic
Narrative: Comedy
Published by: Sierra On-Line
Developed by: Sierra On-Line
Released: 1987
Platform: DOS
The second part of the adventures of the unlucky janitor and charming lazy person Roger Wilco. After the victory over the Sariens, won in the last game, our hero did not rest on his laurels for long - obviously, saving his native planet is not enough to provide himself with a livelihood for the rest of his life. Without thinking twice, Roger returns to the occupation that he does best - cleaning spaceships. On the deck of one of them, we find him, not changing his main principles - work less and sleep more. But events take a sharp turn when Roger suddenly finds himself in the clutches of the minions of Sludge Vohaul - the mysterious and omnipotent villain who, as it turned out, was behind the Sarien army in Space Quest I. Now Roger's task is to avoid the revenge of the bloody tyrant, to stay alive and save humanity from enslavement again. And we help him in this.
Both externally and in terms of gameplay, the game is a direct successor to the first part, and one should not expect any fundamental changes from it. The main focus is still not on manipulating objects, but on performing the right actions at the right time. In the course of his misadventures, Roger will have to visit the jungle-covered planet of Labion and face the many deadly dangers prepared for him face to face. And the word "deadly" here is not just a turn of phrase, but a hard fact. During the passage, you will have to see a small window more than a dozen times, ironically telling about the next untimely death of the hero. But do not lose heart - after all, like the previous part of the series, Space Quest II is filled to the top with wonderful humor (albeit rather black) and jokes that make you laugh out loud. Thanks to this, exploring the forests, caves and underground catacombs of Labion does not get bored for a second. As in the first part, many of the traps set by caring developers seem a little dishonest - well, you can’t see this damned pit with stakes in the grass with the naked eye, you just can’t! But this is one of the main features of Space Quest - you never know where death awaits you this time. So get ready to save more often. In general, the complexity of the tasks offered to us is not too high, most of the necessary actions are quite logical, and the game itself seemed to me easier than the previous one. But I can’t help but mention that at least in one place you are guaranteed to get stuck if you haven’t taken a vital item a couple of steps before, and no one will let you return to the previous screen for it. Therefore, it makes sense to keep at least two or three slots for saving.
In terms of duration, the game, perhaps, slightly exceeds the first part, but just a little. The number of locations and actions required to win is small, but there is a counter of points already familiar to us, scored for a wide variety of events. Moreover, to complete the game, it is not necessary to score the maximum, so the most inquisitive and attentive players will earn an additional reward in the form of a higher end result.
As for the graphics, despite all its limitations, the EGA palette not only does not cause rejection, but also looks surprisingly nice and cute. All important objects are drawn in sufficient detail so as not to provoke excessive pixel hunting, and the landscapes of the space base and underwater waterfalls are worthy of every admiration.
In general, Space Quest II is a worthy successor to the series, in the company of which you can spend many pleasant minutes. If you urgently need to brighten up a failed evening, then there is no better candidate.
Note to readers: in 2011, Infamous Adventures released a full-fledged remake of the game in VGA style with full voice acting, and it is also distributed completely free of charge. So, if for some reason the original version does not suit you, look for its new incarnation.
‹
›
Home
View web version