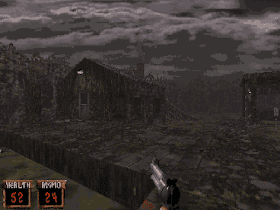 Genre: Action, FPS
Perspective: 1st-person
Gameplay: Shooter
Interface: Direct control
Setting: Contemporary, North America
Narrative: Comedy
Published by: Interplay Entertainment Corp.
Developed by: Xatrix Entertainment
Released: 1998
Platform: DOS
The official follow-up to the action Redneck Rampage, this addon features two full episodes where you once again play as Leonard and Bubba. Lead them across America, back to Hickson, after the UFO crash at the end of the first part. Despite the outdated Build-engine, the artistic component of the levels is on top even for such an old engine. The maps still have rural landscapes and, by and large, have remained at the level of the first part.
The new game features steerable vehicles, some guns (including a cutter), some new aliens, and 14 new levels.
‹
›
Home
View web version