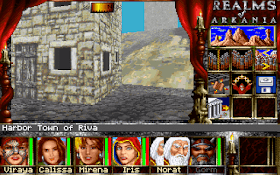 Genre: Role-playing (RPG)
Perspective: 1st-person
Pacing: Turn-based
Setting: Fantasy
Published by: Sir-tech Software
Developed by: attic Entertainment Software GmbH
Released: 1997
Platform: DOS
The third and, alas, the final part of the "Nordic trilogy". Having traveled a heroic path, having accomplished many feats of arms and having accumulated treasures, our adventurers arrive in the port city of Riva, where they will have to finally put an end to the protracted confrontation. And, by the way, to finally get to the bottom of the truth.
Travels and related preparations for a long journey have gone into the past, including the purchase of fur coats, provisions and alpenstocks, road planning, making difficult decisions. Since the action takes place in Riva itself and its environs, there is simply no need for this. Farewell, earned by the druid's sickle and rich knowledge of the state's herbology. If in the first two parts of the series it was mainly us who traveled, then in "Shadows over the Riva" it is mainly us who travel - often,
at the most inopportune moment for this. Therefore, a good adventurer, like a pioneer, is "always ready": cheerful, fresh, well-fed and armed to the maximum. As a consolation (and a very good one), I can only note that the places for our travels will be "more and more wonderful" over and over again. In terms of analogues, only Anvil of Dawn comes to mind, where the locations also did not suffer from the very concept of such locations. So in terms of eventfulness, adventures and "what a twist!" Riva will still give odds to the first two parts.
The interface has also been changed. The exploration mode is now fully 3D, and the ability to walk in step and turn solely on commands like "go there!", which has become the standard since the days of such classics as the Dungeon Master, is a thing of the past. As a result, we are waiting for fully three-dimensional maps. Maybe not with such a steep elevation difference as in Thunderscape, but with the most real multi-level.
But the only thing that has remained unchanged is the love of the authors for their offspring. The world, as before, is worked out to the smallest detail. Even the interface itself changes depending on where we are - in a safe haven or in a place where anything can happen. The setting itself, although it gives the impression of fabulousness, remains surprisingly "adult". And it’s not even about the presence of brothels and greasy jokes, but about the competent formulation of those questions that fantasy people don’t really like to talk about. For example, in Riva there is a whole quarter of "holberkians" - an outlandish people of half-orcs, half-elves. As you might guess, in the conditions of confrontation with the gray horde, the locals do not favor them. However, from whom else, if not from them, to equip a detachment of envoys for negotiations?
Summing up, we note that thirteen years after the release of Riva, Drakensang was born - a party RPG, which takes place in the same setting and approximately in the same places. Moreover, the characters are well aware of both Higellic and other significant people, places and events of the Nordic Trilogy. In addition, there are remakes of the first and second parts, almost verbatim reproducing the events of that in modern graphics. You can love them, hate them, tactfully ignore them ... However, it cannot be said that the trilogy was just a fleeting shadow that went unnoticed by the world of computer games in general and "role-playing" games in particular.
‹
›
Home
View web version