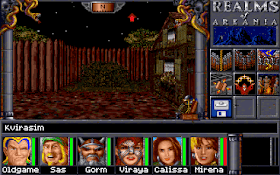 Genre: Role-playing (RPG)
Perspective: 1st-person
Pacing: Turn-based
Setting: Fantasy
Published by: Sir-tech Software
Developed by: attic Entertainment Software GmbH
Released: 1994
Platform: DOS
The second part of the "Nordic trilogy" - and, perhaps, one of the best continuations of the series. Of the analogues of such a commendable "continuity of generations", only Fallout and Icewind Dale come to mind with two parts each.
This time, our team of adventurers from the glorious city of Torvala is sent to finish what they started. The legendary blade of Higellic has been found, but the end of the war is still far away. Very far. To bring this glorious day closer, you need to find a certain Salamander Stone - an artifact that can reconcile the warring gnomes and elves. I think it is not necessary to explain who will go in search of him?
Immediately after arrival, our party falls into a maelstrom of adventure. Finding the legendary throwing ax Star Trail, putting things in order in one of the cities, exploring the ancient ruins and finding what you are looking for, losing, finding again, being captured, escaping - these are just a fraction of the adventures that the game offers.
What can you say about the series as a whole? She is selfish. For example, what other game of that time has negative characteristics of characters like superstition, which lowers magic resistance? Indeed, what kind of resistance can we talk about when our character is just waiting to be jinxed? So the development of characters consists not only in "pumping" the merits, but also in getting rid of the shortcomings. However, not all of them are harmful. In any case, the game mechanics itself (and specifically, the character generator) does not at all imagine non-greedy gnomes or non-superstitious seafarers.
As in the first part, a lot of attention is paid to the little things that provide immersion in the atmosphere. For example, every merchant, blacksmith, healer, and so on is a Personality, and not just an interface of a tavern or shop. Someone winds up prices, someone sells things with a very modest margin. Moreover, in a hotel or a tavern, you can slip off tasteless slops; moreover, this is decided not by a great randomness, but by the preferences and decency of the owners themselves, who, by the way, can easily refuse to serve a dwarf or elf.
Almost every component of the game, be it alchemy, herbalism, fishing (alas, only in a couple of places strictly designated for this) is made with love. For example, visitors to the same taverns will not like it very much if your full-time diplomat jumps from one table to another and pester people with questions, moreover, irritation will increase gradually, with an increase in the number of tables "served" in this way. However, perhaps the breadth of the soul of your party, which bought booze for everyone, will make you look at what is happening from a different angle...
A lot of pleasant emotions are caused by the new three-dimensional game engine. Here, in exploration mode, you can move around the city or dungeon both discretely (by cells) and in free order - in this case, the camera tilts hilariously when the party lays too sharp a turn. Alas, this compatibility mode with the previous version has also made its own adjustments to cartography - houses and rivers are also located "by cells".
But the main highlight is that the game is really role-playing, constantly showing who is the "weak link" here. Let only one dwarf in the party not know how to swim - this will play absolutely no role ... until the first need to cross the water obstacle by swimming. Let only one character suffer from necrophobia - let's see what the party will do when he runs away in horror, barely noticing the bones moving badly ... The game forces the characters to unite and not only optimize the skills that they want, but also correct these these are the shortcomings due to which the character can let others down at the most crucial moment. By the way, many skills can be .. negative! Some people are so "not given" in some area that, before talking about some kind of development, it is necessary to carry out a thorough work on mistakes and get rid of stereotypes. It also makes you look at the classes presented in the game differently. Let some wandering jester be a very mediocre fighter, but someone has to earn money with acrobatics and clowning at the very beginning of the game!
‹
›
Home
View web version