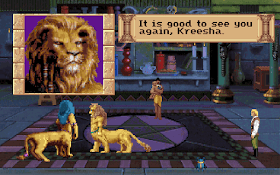 Genre: Adventure, Role-playing (RPG)
Perspective: 3rd-person
Pacing: Real-time
Setting: Fantasy
Published by: Sierra On-Line
Developed by: Sierra On-Line
Released: 1992
Platform: DOS
Having dealt with the evil magician Ad Avis, our hero, together with the left Taurus paladin, goes to his country... This time we will have fun in an African setting.
The game does not offer any significant innovations - except for a modified engine and a redesigned global map (say NO! to thousands of cloned screens, say YES! to a map like in Fallout), which is shamelessly buggy (if you were overtaken by a random skirmish in the middle of the wasteland, then to escape from persecution, if if you want it, you will have to go all the way to the city - and the scale of the map is impressive (it’s easier to hang yourself right away or take a fight, which is the same thing).
Separately, it is worth highlighting the presence of a normal love line (well, in past episodes it was not there, and in the next all attempts to spin tricks with someone will be fatal for the Hero) and the final alteration of the hero’s clothes - in future episodes it will no longer change.
Paladins retain the most important parameter introduced in the second part - Honor. It depends on whom, how and when, if at all, we save, what we say, and so on. It affects the development of our Paladin power - in this series it is not important, but it will be oh so difficult for a Paladin not imported from here in the fourth series ...
‹
›
Home
View web version