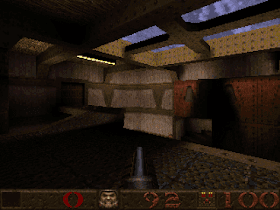 Genre: Action, FPS, DLC / Add-on
Perspective: 1st-person
Gameplay: Shooter
Interface: Direct control
Setting: Fantasy
Add-on: Item, Map / level, NPC / enemy, Other, Story / mission
Published by: id Software
Developed by: Hipnotic Software
Released: 1997
Platform: DOS
It's nice when the right people take on a less rewarding job - creating an add-on for a sensational game. Hipnotic Interactive is also known to gamers as Ritual Entertainment.
Addition at first glance is standard - to run, jump and shoot for exactly three new episodes. Everything is in the tradition of Quake - the indispensable zeroing of everything acquired at the beginning of the chapter and there are secret levels. Unless the episodes go sequentially, and not by choice. The chapters themselves are made in the usual style; the environment is dominated by gloomy gothic, but the whole episode consists exclusively of man-made levels that were present in the original in a very limited amount.
The highlight of Quake has always been in the approach to creating levels, the architecture of which often featured a large amount of abstraction. In Scourge of Armagon, the developers turned towards realism. Now at the levels there are all kinds of decorative and not only (yeah, traps!) elements, such as coffins and bookshelves, thanks to which the surrounding buildings and rooms have become more like real ones. But everything in moderation and the original Quake concept did not suffer. On the contrary, sometimes developers come up with something completely crazy. Let's say one of the levels is something that consists of many structures hanging in space. This type of environment would later become the hallmark of the series.
Not very good only with weapons and monsters. The first group is represented by a good laser gun, a redrawn grenade launcher with slightly different functionality, and a hammer that strikes with electricity. Of the monsters, we have a mechanized scorpion briskly dodging shots, a flying suicide ball and thieving (in the literal sense, so take care of your weapons) gremlins. Laughter and nothing more.
The addon turned out to be unusual, with a slightly changed mood compared to the original, for better or worse.
‹
›
Home
View web version