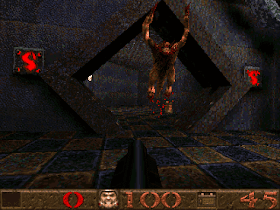 Genre: Action, FPS, DLC / Add-on
Perspective: 1st-person
Gameplay: Shooter
Interface: Direct control
Setting: Fantasy
Add-on: Item, Map / level, NPC / enemy, Other, Story / mission
Published by: id Software
Developed by: Rogue Entertainment
Released: 1997
Platform: DOS
Again and again, monsters do not sit in their native dimension. And who better than us can stop them? So a shotgun in your hands, an ax in your teeth - and go!
The first and, perhaps, the main charge of surprise falls on the player with a detailed acquaintance with the levels filling the addon. If one of the two added episodes seems to be quite in the spirit of the original game - except that the “grunts” and “enforcers” standing in an embrace with the main demonic fraternity are embarrassing, then here is the other one ... The other one tries to look more like some kind of Hexen II or even Chasm than actually on Quake. About half of the maps of the episode are made in the style of the civilizations of the Ancient World (Egypt, Greece) with the corresponding opponents as mini-bosses. This is an extremely dubious decision: on the one hand, something new, on the other - a clear non-following of the principles laid down earlier, and yet Dissolution of Eternity is just an addition.
But what an entourage! The main thing for a shooter is design. There are almost no problems with him. Made clearly, without excesses, sometimes with bold but controversial ideas, like crumbling rocks and earthquakes. It is worth noting, however, not the best design trick of the form "press n buttons to move forward." And one more thing: the cards are full of all kinds of traps, but this is not a minus at all, but rather an amateur.
The strange approach to replenishing the gaming arsenal upsets. There are no absolutely new weapons, there are only variations on the theme of the old one. At the behest of the developers, almost every copy of the murder weapon (the “one” and the shotgun with the older brother were left out of work) received its reinforced double. It must be said that the monsters have not become particularly stronger and the new multi-rocket launcher, which fires several shells at a time, smashes some death knight to pieces in a matter of seconds. In addition, the problem of lack of ammunition has almost disappeared, because reinforced weapons have their own, unique ammunition.
Speaking of monsters. Both updated types of old and never seen before have been added; the aforementioned mini-bosses can serve as an example of this. Special mention deserves the final addition to the enemy - get ready for a big surprise!
What exactly there are no complaints about is the musical accompaniment. It's unusual, but it certainly does an excellent job of maintaining, so to speak, morale.
Dissolution of Eternity is a good set of levels, but with a number of sores, which, however, do not really spoil the impression of the very process of destroying monsters.
‹
›
Home
View web version