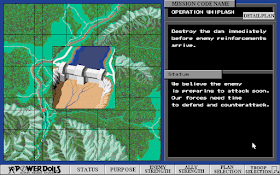 Genre: Strategy
Perspective: Top-down
Art: Anime / Manga
Pacing: Turn-based
Vehicular: Mecha / giant robot
Setting: Sci-fi / futuristic
Published by: MegaTech Software
Developed by: Kogado Software Products
Released: 1995
Platform: DOS
For hundreds of years, the government of the Earth has exiled all objectionables to colonize distant planets. But when the Empire decided to take them back into its own hands, it faced fierce resistance from the colonists. You have to stand at the head of a small detachment of manned robots and defend the freedom of the colonists.
The game has about eight sequels, but only the first part was translated into English.
‹
›
Home
View web version