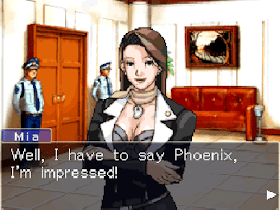 Genre: Adventure, Simulation
Perspective: 1st-person
Art: Anime / Manga
Gameplay: Puzzle elements
Narrative: Detective / mystery
Published by: Capcom Entertainment
Developed by: Capcom Co.
Released: 2005
Platform: Nintendo DS (NDS)
The player takes on the role of Phoenix Wright, who acts as a lawyer. The game has two components: an investigation and a court hearing. During the trial, players must perform various court activities, including cross-examining witnesses, providing evidence, and challenging contradictory statements or evidence provided by the prosecution. The player has five exclamation marks showing his health. Exclamation marks are taken away when the referee penalizes a player for making unsubstantiated statements and providing inappropriate evidence. While in the first episode the player does not leave the courtroom, in the following episodes the judge takes breaks in the session if some topic is brought up that the parties must investigate before the session resumes. These days the player controls Phoenix in first person and investigates important locations. There are four options in this mode: Talk, which the player uses to talk to characters; Show, with which the player shows the characters clues; Explore, which allows the player to search the area; and Leave, with which the player can move to another location. A new episode, included in the Nintendo DS version, introduces new investigative gameplay that builds on the console's capabilities. These options include a luminol spray that allows you to see blood that is normally invisible to the naked eye, and an aluminum powder used for fingerprinting. Both features use the touch screen, while the latter also uses the microphone. The player in this episode can also rotate the evidence in space, allowing them to notice things that are not visible when the evidence is displayed as a 2D image. The DS version also offers the ability to play using only the touch screen, the ability to examine evidence and case files on the top screen, and the ability to use a microphone to speak various phrases.

In the game's first case, Phoenix Wright, under the watchful eye of Mia Fey, successfully defends his first client and childhood friend, Larry Butz, who is accused of murder. However, in the game's second case, Mia is killed for being aware of corporate blackmail, and her younger sister Maya Fey is accused of murder because her name was written on one of the evidence. While defending her, Phoenix meets another childhood friend, Miles Edgeworth, who is the prosecutor in Maya's case and is considered the "genius" of the prosecution system. Maya pleads not guilty to the crime and becomes Phoenix's assistant in subsequent cases. From time to time, she uses her abilities as a medium of the village of Kurain to call on the spirit of Mia to help in a critical situation. Phoenix and Edgeworth notice that although they are childhood friends, they continue to meet face to face in the courtroom.
In one of the cases, Edgeworth is accused of murder, and Phoenix undertakes to defend him. It is revealed that Edgeworth was framed by his old mentor, Manfred von Karma. A few years earlier, Manfred had shot Edgeworth's father, a lawyer, for breaking his streak of flawless victories. Manfred led Edgeworth to believe that he himself killed his father. Phoenix exposes Manfred and seeks a "not guilty" verdict for Edgeworth. After the meeting, Edgeworth contemplates resigning as prosecutor to reflect on what happened, while Maya announces that she is going back home to the village of Kurain to continue her spiritual training.
A fifth case, added in the Nintendo DS, iOS, and Wii versions, features Ema Skye pleading with Phoenix to help protect her older sister Lana, who is accused of a murder aggravated by the same victim's second murder in another building at the same time. Using Ema's scientific help to find clues and Edgeworth's unexpected prosecutorial help during a trial, Phoenix learns that Lana Skye was blackmailed by Police Chief Damon Gant into not telling anyone about a murder she thought Ema committed for several years. previously. It turns out that Gant himself is guilty of the murder, and in doing so, he put the blame on Ema. Although Lana is cleared of all charges, she goes to jail without permission for being Gant's accomplice; Ema says goodbye to her sister and leaves for Europe to study forensic medicine.
‹
›
Home
View web version