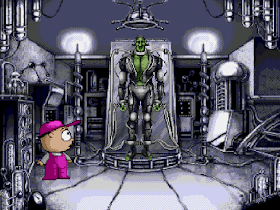 Genre: Adventure
Perspective: 3rd-person
Art: Full Motion Video (FMV)
Gameplay: Puzzle elements
Setting: Sci-fi / futuristic
Narrative: Comedy
Published by: Data East USA
Developed by: Office I, Sega AM7 R&D Division
Released: 1993
Platform: SEGA CD / Mega-CD
Funny game Panic! slightly underrated. The game tells about the adventures of a boy named Slap and his faithful friend the dog Stick, in a virtual world. It all started with the fact that a computer virus infected the worldwide computer network. And now all the equipment rebelled, including cars, steam locomotives, etc. But the antivirus program "Panic!" was created. Apparently, something went wrong, as planned, and our hero, playing his game console Sega Mega-CD, gets on the other side of the screen. Now, by pressing the buttons in a certain sequence, you need to get to the main computer and stop this chaos. The game is full of humor and the gameplay is simple and straightforward. All that is needed is to remember the correct combination of pressing certain buttons. If you make a mistake and click in the wrong place, in most cases you will see a funny video.
The first version of the game was released for Japan under the name Switch. It was later released for the North American region as well, but was already censored and lacked levels 2A and 9B.
‹
›
Home
View web version