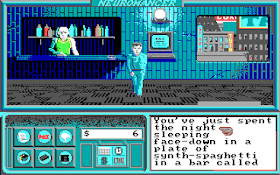 Genre: Adventure
Perspective: Side view
Visual: Fixed / flip-screen
Interface: Menu structures, Point and select
Setting: Cyberpunk / dark sci-fi
Published by: Interplay Productions
Developed by: Interplay Productions
Released: 1989
Platform: DOS
Adaptation of the famous book by William Gibson.
The events of the game take place after the events of the book, but in the process the hero (not Case at all, although similar) will have to face the consequences of Case and Molly's entertainment that happened in the book, as well as fight Neuromancer for the fate of the Matrix. However, words cannot describe everything - the game provides fairly broad approaches to solving problems (not enough money? Sell your organs!), A very sophisticated hacking process (and where without it in a book that defined the mythology of hackers for twenty years in advance?) and so on , further, further...
‹
›
Home
View web version