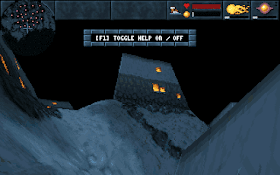 Genre: Action
Perspective: 1st-person
Gameplay: Shooter
Interface: Direct control
Vehicular: Flight / aviation
Setting: Fantasy
Published by: Electronic Arts
Developed by: Bullfrog Productions
Released: 1996
Platform: DOS
Press R key to toggle 640x480 mode.
Press F1 to toggle sound FX.
Press F2 to toggle the music.
Magic Carpet 2: The Netherworlds - endless expanses of Netherworld have always been famous for their beauty and absence of any serious conflicts. However, everything changed on that terrible day when the country was at the mercy of the insidious Lord Vissuluth and his insane minions. As you might guess, your sacred mission is to save your native lands from the merciless creatures of the forces of Evil, as well as to restore peace and tranquility to their inhabitants. It is worth noting that, unlike the first chapter, "Magic Carpet 2" has acquired a thoroughly improved graphics engine, an even more impressive range of available tasks, as well as a more dynamic and varied gameplay, which, nevertheless, is made in the best traditions of the original game. Admirers of the original source - highly recommended!
‹
›
Home
View web version