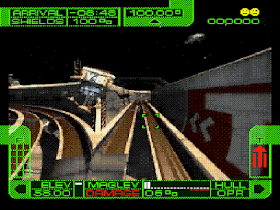 Genre: Action
Perspective: 1st-person
Art: Video backdrop
Gameplay: Rail shooter
Setting: Sci-fi / futuristic
Published by: Rocket Science Games
Developed by: Rocket Science Games
Released: 1994
Platform: SEGA CD / Mega-CD
For the Sega Mega-CD, a large number of rather strange games have been released that are not understandable to the average ordinary player. Loadstar: The Legend of Tully Bodine, made by Rocket Science and published by BMG Interactive, is one of those games. The game takes place in the 22nd century. You have to control a space cargo ship and play as its captain, Tully Bodine, who is an interplanetary trucker. The last delivery of smuggled camels awaits him. But Sheriff Wombley can always find something to complain about.
But our spaceship is more like a train, since we cannot surf the vastness of the universe. Our task will be to shoot back from all sorts of incomprehensible space robots or ships to choose the right path. The benefit of Mortimer is that the ship's computer will help us and show us the right path, and also give hints at what point it is worth turning on the protective shield. Also towards the end we have to fight the Boss.
The game is a genre of interactive video. But we will also see a large number of FMVs with various famous actors such as Ned Beatty and Bary Primus.
‹
›
Home
View web version